The seasons have come full circle and spring is here again – well that’s what the calendar says. Not so sure about the weather. The cool temperatures sure do challenge any gardener but there are always some plants that are hardy enough to cope.

The vege garden is a bit bare but through the winter months I planted silverbeet, kale, cauliflower and broccoletti (a cross between broccoli and Chinese kale). The silverbeet and kale have provided a few meals and the cauliflower and broccoletti should fill the gap before the summer veges arrive - and no need to worry about marauding white butterfly!

Broad bean seedlings planted in April are flowering but there haven’t been any bumble bees around to pollinate them so they will likely be a late crop.

When the garden is at rest over winter, I use the empty ground to dig in the fruit and vege scraps from the kitchen - instant composting. I dig a trench to a good spade depth, empty in the scraps, chop them up with the spade, then recover with soil. They disappear in a very short time and over the years the soil has improved with the extra organic matter. I find this method quickly disposes of onion skins and citrus peels in particular which worm farms won’t handle.

In August, the green crop (mustard) was dug in followed by a sowing of ‘Easy Peasy’ peas. The shoots are now poking skyward - perfect fodder for slugs and snails so a sprinkling of snail bait has gone down.

The first row of potatoes was planted the last weekend of winter - variety Desiree, the world's most popular red potato. This early main crop potato has pale yellow waxy flesh and particularly good drought resistance - that might be handy this year with the predicted El Nino weather. A week or three later a row of Victoria goes in. This is a golden early main crop variety similar to Agria. I grew it for the first time last year with good results.

To plant potatoes I make a shallow trench about half a spade depth deep, scatter down a few handfuls of superphosphate, stir that in, and then place the chitted potato seed in the trench with the best sprouts facing skyward. They are then covered over with soil and protected from the cat with a strip of wire netting.

If there is little rain, I do use the sprinkler to keep the plants watered but I have found that too much water results in a smaller crop, so as the plants mature, I water less.

Growing summer veges from seed will be risky with the current low temperatures and very much delayed. So I’ve made the decision to purchase seedlings of tomatoes, zucchini and beans from the garden centre. At 3 to 4 weeks old when purchased they will have a head start and allow me the flexibility of planting when the weather is favourable.

Fingers crossed, the next few weeks will be sunnier, allowing the earth to warm and the plants to flourish. 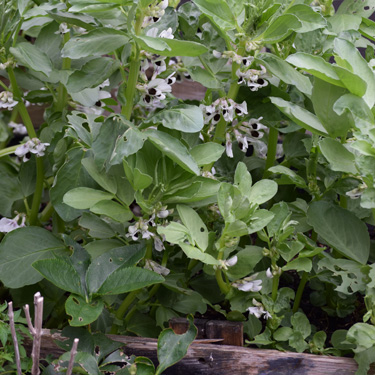 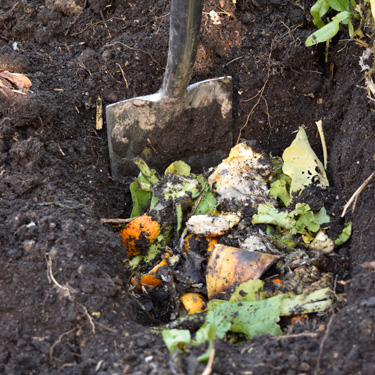 Digging in the kitchen scraps 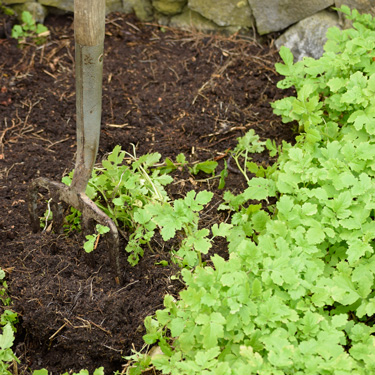 Digging in the green crop 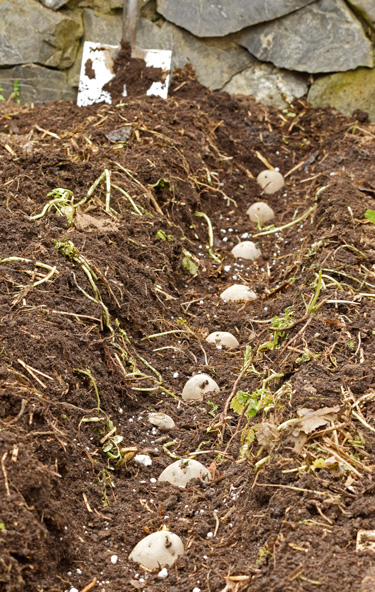