Confused?  It is quite understandable that you may feel some confusion around the differences and the variations of what has often been inappropriately labelled as plain and simple Dirt.

To start… Let’s agree not use the D word again in the garden context. Dirt is the road residue left on the side of your car, or the conglomeration of indistinguishable substances left on the face of your three year old.

So what exactly is in the back yard under the shrubbery then? It is soil.

Garden soil is made from deposits of various material mixed by a generous dollop of time.  These compounds include dead leaves and other organic bits and pieces, followed by a layer of decayed organic matter called humus. Underneath are minerals and clay or sand/silts followed by bedrock. Various living organisms live and die in this mixture of ground up rock, clay, air, sand and microbes.

Climate and geology pay a large part in the lottery of just what percentage of the aforementioned ingredients that you happen to end up with in your particular back yard.

Conversely, Potting Mix is the manufactured result of generations of keen gardeners and nurserymen demanding a soil or growing media that could be produced to an exact recipe repeatedly.

Why?   It’s all about control.

Knowledge is power. The more you know about the makeup of your soil, the better the chance you have of getting the positive result you seek e.g. healthy bountiful plants and produce. 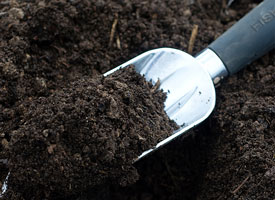