Every new beginning comes from some other beginning's end

There is no denying it - summer is behind us. We are well and truly into autumn and the garden is beginning to show signs that it is exhausted from a season of working hard to produce such a bountiful harvest, to fill my larder and my freezer. It is with great reluctance that I have to admit we are on our slow descent into the cooler months.

Ordinarily I am quite stubborn and ignore the encroaching season, leaving plants where they fall, often still clinging to the last of their crop that I either have no further room for or I have eaten my fill over the months and couldn’t face another tomato or zucchini.  I operated under the theory that if there was still a hint of green on a plant then it could stay put until it became brown and crispy.

However this season I have discovered a better way.  Instead of having a late season garden full of death and decay, I have found that clearing away the plants as they finish and putting them on the compost pile, or in the bin if there is even the remotest chance that they may be diseased, leaves the garden feeling somehow rejuvenated and refreshed.

The cool season crops can then be planted with an expectant pleasure of the fresh, crisp vegetables that will grace the table in the heart of winter.   This is a huge change from the usual sadness and reluctance planting them out would bring as I mourned the passing of summer.

As each bed empties out I take some time to contemplate the following season and which crop will take its place come spring.  As my crops rotate from bed to bed the conditions required in the soil changes.  The leafy greens will require a bed rich in nitrogen so it will be useful to plant a cover crop such as lupin or broad bean so they will release a healthy load of nitrogen back into the soil as it rots down when I chop it into the soil in the late winter.

However the tomatoes won’t be as interested in a nitrogen rich soil as I am wanting fruit, not leaves from this crop, so its future bed may benefit from a generous layer of organic material in the form of compost or aged manure, left on the surface for the cold weather to break it down and the earthworms to drag it deep into the soil, ready for the new plants.

Carrots on the other hand don’t like organic material at all and will fork at the sight of it, so this bed is best left alone.

So instead of autumn being all about things coming to an end, it has become a time of great expectation for the season ahead.  And as each crop comes to an end I find myself excited about preparing the ground for the future because next year will always be the one where all the conditions align to make everything perfect – well, there is always hope! 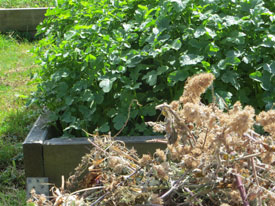