It's all downhill to Summer

June isn't always the most favourite month in anyone's calendar. Unless of course you are an avid skier. It is the first month of winter. Although it is generally a kind month as we still bask in the afterglow of autumn, and so apart from the occasional wet spell or frosty morning, it isn't too bad.  But the days are short and dreary and you really don't want to do much outside in your spare time, not that there is all that much too do in the garden.  Maybe prune a hedge, plant some strawberries and watch the grass grow.

But the upside to all this dreariness is June is the host to the shortest day on the 21st.  So while it may not be the coldest of the winter months – there is a turning point towards summer and I will take any glimmer of brightness to help this bleak season pass more favourably.   From Saturday the 21st of June the days will begin to grow longer as we make our slow descent into the warmer days of summer. Hurray!

I have better things to do three days before Christmas than harvesting garlic and onions.  You will find me in the stores doing some last minute panic buying, there is a cake to decorate and over excited kids to manage.  The whole house will need a deep clean from top to bottom to impress friends and family who have seen my house at its worst.  Onions and Garlic are NOT on my Christmas to do list.

But waiting until after Christmas is a problem too as there is the family holiday at the beach, and the house sitter won't want to dig them up.  Besides I want to dig them up – I want to see how well those garlic bulbs hidden below ground have done.  But leaving them until after the holidays is just that little bit too late and they are just that little bit past their peak perfection.

Then I noticed on the packets – garlic can be planted anytime between May and September and onions are good to go anytime, it would seem, from March to October!  I don't have to be tied to the constraints of an old wives tale.  I can plant them when it suits me.  I feel liberated from the strict 24 hour window of time with which to plant my alliums.

However I don't think I would want to stray too far from the tried and tested wisdom as onion and garlic are affected by both day length and temperature.  The increasing day length stimulates the plants to stop producing leaves and start to fatten up.

The variety of your onion or garlic determines when this process starts.  If there is a cold spell once the bulb has started to develop then the temperature tells your bulb to stop fattening up and send up a flower. But you don't want your onion and garlic to bolt, so as soon as you see a flower shoot, it is probably best to pull the bulb out as it won't grow any bigger and won't store well.

I have carefully calculated the number of days after Christmas and the holidays – including the days doing the post-holiday washing to find a day that suits me to harvest the garlic and onions and so I shall be out there a couple of weeks beyond the shortest day planting my alliums and hoping for a fantastic harvest. 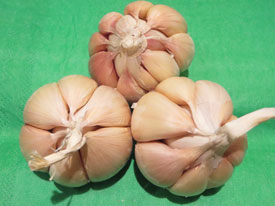