I have sown the vast majority of my seeds in the warmth of my greenhouse.  Most but not all.  Experience has taught me caution.  I remember not so fondly the year I first got a big plastic greenhouse that was more like a tent than anything else.  Or more accurately it was more like a hot air balloon on a gusty spring day – but that traumatic experience is a story for another day.
That big greenhouse felt so large on the inside it was amazing.

Now I was really gardening and because I had the space I felt obliged to fill it.  So I gathered together ALL of my seeds and set about sowing them all.  In September, early September.  I was in my element, cosy and warm in there with my hands in the seed raising mix, while it was cold and wet beyond the plastic cover.

I not only sowed what I needed, I sowed backups, extras and spares.  To be honest back then I didn’t even know what I needed.  The concept of planning was lost on me. I was more familiar with the idea of bunging plants in any old how and hoping for the best!

I sowed my carrots and parsnips in lengths of guttering that I had drilled holes into for drainage.  I had heard somewhere that they didn’t like their roots disturbed so I thought I was so clever and had figured it all out.  I would just dig a trench and slide them in when the time was right and they won’t be bothered by the move at all.

This taught me that it isn’t so much they don’t like their roots disturbed, although this is true, but they have long tap roots – being carrots, and so when their roots hit the bottom of my guttering they started growing along the bottom.  When I slid them out into the garden they continued to grow ‘L’ shaped!

I had run out of pots for my beans so I made paper pots, which are fantastic for growing seedlings in.  You just pop them into the soil and the roots grow through the paper with the minimum of disturbance – but not if you intend to leave them in the greenhouse for two months.  I was waiting for the safety Labour Weekend to plant everything out free from the fear of frost.  It was a late Labour weekend that year.

The roots grew through the paper into the other paper pots around them and then the paper disintegrated and I ended up with a tangled bean root mess that was next to impossible to liberate individuals from.  Beans do much better being planted straight in the ground when the weather is warm enough – around 15°C.  I know this now.

But the bean root tangle was nothing on the jumble the cucumbers, zucchini and pumpkins got themselves in.  Their tendrils reached out and grabbed onto their neighbours with a ferocity that said “I’m clinging on to you for grim death, because she doesn’t know what she is doing and we are all going to die!”

By the time it was safe from frost and ready to plant them out they were fully interwoven and it was best to treat them as one giant plant, and they were fruiting.   They were like wayward teenagers!  But in actual fact they were fully fledged grown ups who were too old to be at home any more.  Most of the Cucurbit family only need sowing indoors about three weeks before they need to go out into a warm frost free environment.  They can get a bit moody and sulk if it is too cold outside for them.

So these days I am more reserved.  I have learnt the value of timing and not planting more than necessary.  My greenhouse is a civil place where each seedling has they own space and will be a good size when the time comes to plant them out.  The only crazy thing going on is me!  I am in and out three or four times a day – just to check how they are doing… have they popped up yet?  Is there a sign of true leaves?  Is it warm enough or do I need to open the vent some more?  Do they need another drink of water?  Once it is firmly planted you can’t take the enthusiasm out of a gardener. 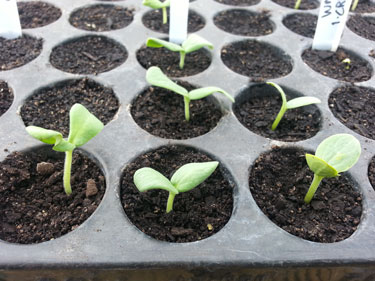