The scent of Summer

I have begun hardening off some of the hardier plants, the brassicas and the salad ingredients.  They are getting too big for their pots and to be honest I need the space.  They’ll be fine going out early, they can handle it if a frost strikes.  But I didn’t want to shock them to much so I have started the in and out dance with them.  This will end up going on for weeks as more fledgling seedlings become ready for the big wide world of my garden in preparation for the big day.

I’m not off to a good start.  The first day was fine, I put them out into a warm wind free spot and then as the evening temperatures began to cool I brought them back into the security of the greenhouse where the overnight temperatures are milder and safe.

The next night I was lying in bed, about to nod off, when I sat bolt upright. ‘My seedlings!’ So I raced out in my PJs and returned them to the safety of the greenhouse.  They were none the worse for the experience.  I don’t think this will be the only time I do this!   I need to keep a sharper eye on the weather forecast.  I would hate for my forgetfulness to clash with frost.

So there I was standing in my greenhouse in my PJs in the moonlight with my hands full of brassicas and I thought “oh my goodness, where am I going to put these?”  I am fast running out of space in there.  So I squished a few things over and raced back inside to the warmth of my bed.

The following morning I decided to do a stocktake of all I have, as some had germinated in prolific numbers and others had really let me down.  I had already done a second sowing to make up for the slow pokes, but I am seriously contemplating a third attempt with a “you better grow or else” threat thrown in with the seed raising mix for good measure.

One by one I began counting them out and I can safely say I have more than enough tomatoes for me, and the neighbourhood.  As I brushed my hands over each plant the evocative scent of summer wafted back up to me.  The tomatoes took me to a hot summer day, where the grass beneath my feet was a little crisp from the baking hot sun, and I could almost taste the tangy flavour of the fresh fruit.

The watermelon leaves offered up the fragrance of the elusive melon that I am determined to have success with this year.  It smelt so crisp and juicy.  The herb leaves don’t even need to be touched to detect the wonderfulness they will add to my summer cooking.  I stand in my greenhouse and begin to salivate at all the amazing tastes that await me in a few months’ time.

This is why I do it, getting out there in the cold and often wet of spring and dig and weed and weed and dig and prepare the ground.  My back begins to ache and I end up with blisters on my hands.  It just seems never ending, but then I do have a rather large garden.

In the midst of all the hard work I frequently ask myself why I do this. What would happen if I just stopped?  But then in the cosy warmth of my greenhouse, that question is answered by the hint of scent found there:  Because it will taste amazing!

So I grab my spade and head back out into the garden to dig a little more. 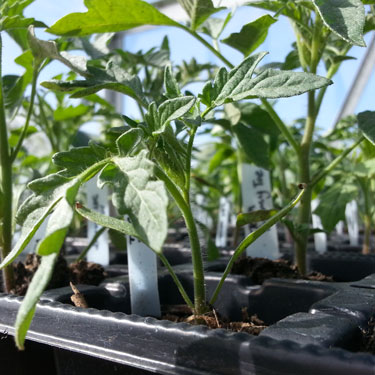