Hanging on to the heat

Summer may have left us, but there are still crops to harvest.  I have worked hard in my garden for the last eight months to store up treasures for the cold winter months ahead.  Many of the vegetables have provided a rich fare for our meals throughout the warmer months.

The cucumbers have pretty much come and gone, thanks to the harsh effects of powdery mildew on such a delicate crop.  I can’t even remember how many times I replanted lettuce seedlings in pursuit of the sweet tender leaves, fighting a battle against the bitter inducing summer heat.  The early season brassicas have long been gobbled up, before the rampaging white butterfly offspring set themselves up among the florets.  The dramatic presence of the corn on the landscape has been reaped.  The bright yellow cobs stored in the freezer for drearier days and the stalks pulled down and relegated to the compost pile.

But the garden is far from finished.  The tired tomatoes are still bearing fruit.  It has gone beyond the early season delight of gobbling them up in the garden with the pleasure of a treat long awaited.  Now they are almost a chore to harvest, their abundance is overwhelming.  But despite this, the harvest is welcomed into the winter larder in various forms.

Parts of the garden are beginning to regenerate as the crops that will provide a fresh crispness alongside the comforting meals of winter are being coaxed into life in the greenhouse.  The choice of cool season crops provide a vast array of possibilities and so winter gardening can almost be as fulfilling for the passionate gardener as the summer garden.  Almost but not quite.

Other parts of the garden are earmarked for a green revival in the form of a cover crop rejuvenation to restore the soil and protect it from weeds.  The presence of this greenery will give the garden a sense of life in a season where often there isn’t anything good to look out upon at all.

But if there was a vegetable that could confidently take its place as the star of the early autumn season that would be the pepper.  And it as has been long anticipated, being the first seeds sown in the lingering chill of late winter, sown with such great expectation of a new season.   Its auspicious start is soon overshadowed by the busyness of the season as the more demanding and prolific crops needed their share of my attention.  Aside from being watered and feed, it was mostly ignored as its growth was barely perceivable.

And then as summer gives way to autumn and other crops fall by the wayside, a bright red appears amongst the foliage.  The absorbed heat of the summer is returned in varying degrees through peppers and chillies offering up a sting in their bite or a more sedate mild flavour.  My garden has a corner that is flourishing where all else seems to be dying and it is a great encouragement.  I am reminded of that first glimmer of hope and look back over the season to see if it was all I had hoped it would be.  The spring was harsh and the summer was dry, but my pantry and freezer is full and so the summer garden has served its purpose.

So I enjoy this last abundant crop, and will it to go on for as long as it can, as the harvest will be stopped in its tracks by the first frost and then the tenuous link back to summer will be gone.  As the first to grow, the last to fruit the pepper has to be my favourite crop of all. 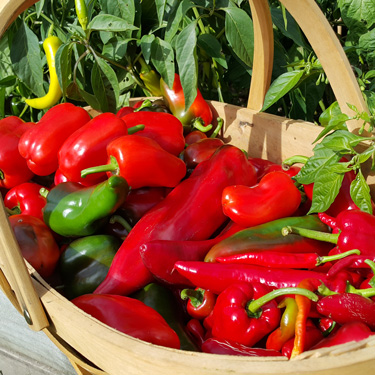