To be honest, autumn is actually my favourite season.   Spring is loaded with hope and potential and is a really exciting time at the beginning of the growing season.  But it is a lot of hard work.  There is much digging and moving great barrow loads of compost about - often in the freezing cold and if you are really keen then in the pouring rain too.  This is of course more than compensated by seeing tiny seedlings emerge and unfurl under your watchful eye.

Summer is lovely.  Everyone loves summer with its clear blue sky days, holidays and festivities.   Outdoor living is almost compulsory as the heat drives everyone to find a shady, breezy corner.  This just happens to go hand in hand with alfresco eating and there is nothing better to compliment this than harvesting the fruits of your labour moments before eating them.  But summer is a busy time in the garden, making sure the plants stay well-watered and weed free.   A gardener’s green thumb is kept well occupied in the long hot summer months.

Autumn is different.  It has a gentler pace.  Crops that previously have almost drowned the gardener in an inundation of produce at a rate next to impossible to keep up with, slow to a gentle trickle.  There is time to take stock of the garden and see what can be done to the exhausted plants to limp them along until the inevitable frost takes them out.  Pest watch almost becomes personal as the numbers of creatures trying to take advantage of all you have worked for rally in numbers against your determination to care for your harvest.    Without the incessant harvest to deal with, there is time to explore the options available at the garden centre and watch and learn as the pest react to this late season battle of wills.

In amongst the drama being played out in the residue of a dying summer, autumn also holds its own kind of hope.  We hope it lingers with warmth and be slow to ease us into the cold of winter.  We hope the tiny seeds planted in its warm soil grow into wonderful crops that will add a freshness to the comforting winter diet.    Seeds sown at this time of year are so much easier to care for in one way – as they aren’t subjected to the chilling fluctuations in temperature that can send a poor seedling into shock, but bask in the steady temperatures and emerge from the soil quickly.

However, the days still have enough heat in it to dry out seed trays in an afternoon so the gardener is still required to hover attentively over what will be the harvest from a season still to come.  I don’t mind this.  I love caring for seedlings and love watching them grow.  To get a second chance at this at what would be the end of the growing season in an unhurried way is a great delight.

There is also something liberating about slowly but surely clearing out the garden as the crops come to an end.  What was once a tangled mess of intertwined tomatoes is quickly and easily pulled out and the disease free plants assigned to the compost pile and turning over the soil to remove the extensive roots that wound their way deep underground in search of nutrients all summer long is strangely rewarding.   An afternoon of effort to remove the growth of a season reveals from under the overgrown garden, the bare outline of a garden that once again holds the hope and promise of next season.   The memories of all the hard work begins to fade as a nostalgia fills the golden glow of autumn.

For products, tips and advice at a Go Gardening Store near you. 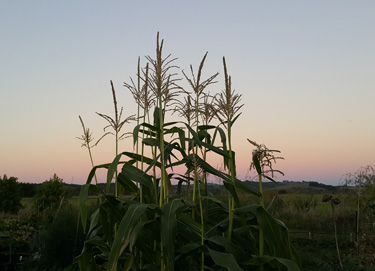 The last of the summer corn