The Flanders poppy (Papaver rhoeas) is our beloved ‘Anzac poppy’ also known as ‘soldier poppy’. Bright scarlet with a black spot in the base of each petal, it is at its most beautiful when sown generously for a beautiful meadow effect as seen in the fields of England and Europe.

Colourful Shirley poppies are the multi-toned offspring of Flanders poppy. Back in 1880, a wild seedling without spots appeared in a vicarage garden at Shirley in Surrey, England. After 20 years of painstaking selection, the vicarage rector created a new strain, and that was the beginning of the Shirley poppies we still enjoy today. Shirley poppies are single or double in many shades of pink, red and white.

Iceland poppies (Papaver nudicaule) come in sunny shades of apricot and yellow with petals like crumpled silk. Pretty in a vase, the cup shaped flowers sit on long slender stems covered in silky hairs that glisten in the sun. This is the cold hardiest of the poppies often seen flowering in mid winter and are wonderful for mass planting. Modern breeding had given us strains with stronger stems and weather resistant flowers.

Oriental poppies (Papaver orientale) produce huge flower buds that open to spectacular double or single blooms up to 15cm wide with crumpled silken petals. The colour range includes reds, pinks, whites and lilacs. The plants grow strongly, up to 150cm tall. In warm winter climates the plants are short lived but usually they will self sow and pop up the following year, although the seedlings hybrid varieties will not return true to type (i.e They will not look exactly like the parent plant). In colder climates are hardy perennials although the foliage dies down in late summer. Attractive seed heads make excellent winter decoration. 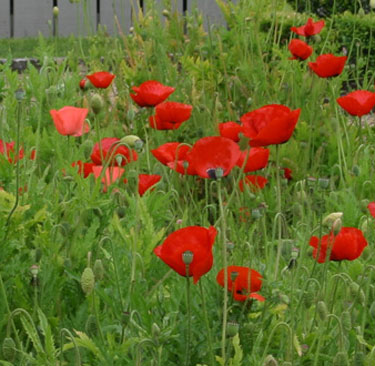 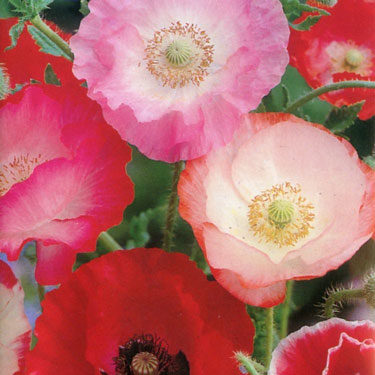 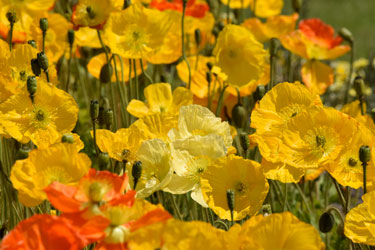 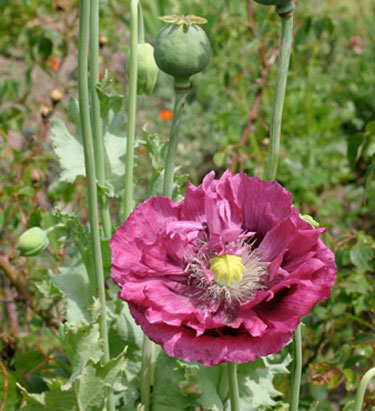