Winter is pruning time for apple and pear trees. In the first few years of a tree’s life the idea is to encourage a nicely shaped tree with a strong framework of branches. On older established trees, pruning is all about getting light into the tree. More sun means more fruit! Pruning is also about rejuvenation - stimulating the growth of younger, more productive fruiting branches. On most apple varieties the best wood for fruiting is between one and four years old.
Pruning is both a science and an art. There is no right or wrong way, but following some basic principles is the best route to success without stress. 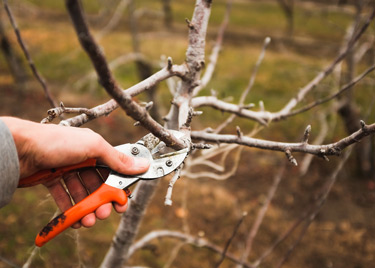 Prune apples and pears in winter