While Living Roofs are popping up around the globe either in compliance with regulatory measures or to save on energy costs, little is known about them apart from their effectiveness. Green roofs or living roofs are intentionally vegetated roofs.  Whilst many start as grasses and shrubbery they are now being used for planting vegetable crops and beautifying buildings with ornamental gardens.

In Toronto, it became a requirement for every new building over 2,000 square metres to have a living roof from January 30, 2010 onwards. Extremely hot summer temperatures are normal in Toronto and the city traps much more hot air than surrounding rural areas. To mitigate these urban heat island effects councillors mandated the creation of green roofs.

Remarkables Primary School is the first school in New Zealand to have a green roof. A need for greater learning space plus a desire to ‘blend’ the school into the landscape were the driving forces for this school’s green roof. The green roof is situated alongside a boardwalk that acts as the schools unique entrance way, meaning the roof is a big part of the school’s look and feel. The plan is that this area will also be used as an outdoor classroom.

Also Down South... Mount Difficulty vineyard opted for a vegetated living roof when building their new barrel store to help regulate the temperature inside, reduce their environmental footprint and ensure that the building blended into the surrounding Central Otago landscape.

Whilst there is no direct legal requirement to provide a green roof in New Zealand surely there is a moral obligation to do what we can to be green. 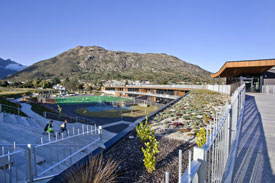