Urban Green, what do we mean?

The term “urban green” is popping up in environmental reports, gardening and lifestyle magazines, blogs and of late in government and council papers and plans. So what does ‘urban green’ mean and why does it matter?

The term ‘urban green’ means so many things to so many different people.  Recent European research defined ‘urban greening’ as “the art, science and technology of managing vegetated areas, and potential vegetated areas in and around cities for the psychological, sociological, economic, and aesthetic benefits green areas provide society.”

But why the focus on urban areas? According to University of Copenhagen research… City beautification is becoming an issue that more and more leaders are following and exploring. The theory being that the more aesthetically pleasing you make a city, the more people will want to live in that city, and the happier they will be.

So who wouldn’t want clean, healthier air to breathe, natural temperature regulation, increased productivity and a greater sense of pride in the area you live/work in? All of these benefits create a positive feeling amongst those who are near green spaces.

As Kermit the Frog once famously said “it’s not easy being green!” Putting the business case for more ‘urban green’ can be tough. Often, short-term decision-making considers only immediate profits and does not fully capture the long-term financial benefits of green space.

The practice of converting green spaces into urban developments is not a new. Back in medieval times warriors battled for plots of land to plant crops to sustain their families. As trading increased so did the need for commercial centres. This resulted in crop fields being harvested, then turned into land for buildings.

But now the need for ‘urban green’ is being recognised. It’s long been accepted that green spaces are good for us. Research is now providing evidence in terms of environmental benefits, physical and mental health benefits, social benefits and economic savings. This evidence is being used to push for more ‘urban green’ in city/town planning developments.

Clearly in some areas population density prevents buildings from being knocked down to make green spaces, and such radical behaviour doesn’t make sense. But there are many other ways to increase the amount of green in urban areas including planting Living walls/vertical gardens, developing living roofs (see issue 383) and encouraging office plants (issue 381). So rather than say “there is no space!” take up the challenge to grow up walls and across roofs to provide more green in your local urban areas. 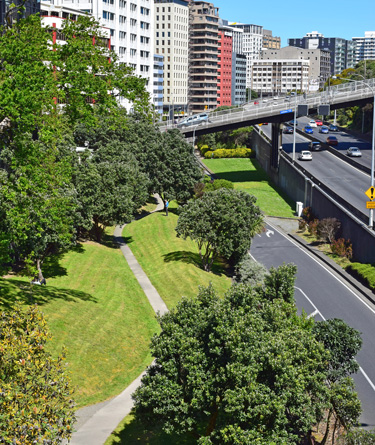