When Jenny Hamill and her partner William became parents, they decided it was time they had a garden. So they moved from their inner city digs to the downstairs flat below William’s childhood home in Meadowbank, Auckland. The flat opens out onto a private outdoor haven tucked away from the hustle and bustle of the city, which they share with William’s parents, Margot and Peter. As well as an idyllic play space for four year old Estelle, the garden provides a constant supply of fresh fruit and vegetables.

Margot and Peter have lived here for thirty-five years. William is the youngest of their six children. With many mouths to feed, Margot planted fruit trees and Peter kept a large vegetable garden. Now Jenny and her father-in-law share the space that was once just Peter’s domain to grow vegetables for their family of five.

Jenny and William both have full time jobs in the city. They garden mainly on weekends.

As a new gardener, Jenny found Peter’s large traditional vegetable plot overwhelming. “I didn’t know where to start,” she explains. “There was just this huge square of dirt.” The solution was to break it down into manageable chunks. With William’s help she constructed raised garden beds – some for herself, and some for Peter. Because recycled treated timbers were used for the raised beds, they couldn’t be sure of the toxin residues that might leach out into the soil, so the sides of the beds were lined with black plastic before the soil and compost was added.

Gradually over time, more beds have been added with paths in between for easy access. The raised beds have also made gardening easier for Peter, now in his eighties, but Jenny points out he still gardens in the traditional way. “Peter plants in straight rows, while I mix things up and plant in groups.”

On the patio just outside the kitchen, more vegetables grow in black plastic fish bins, which Jenny has discovered make very cost effective containers. She drills holes in the bottom and sits them up on bricks for drainage. The bins are filled with a mixture of home made compost and Vegetable Mix from the garden centre. Jenny also adds Saturaid to help with water absorption “That’s something I learned from a TV garden show”. In the bins she plants seedlings of spinach, silver beet, and lettuces. Sprinkling the seeds of mesclun salad mix has also proved highly successful
in these bins. Jenny is amazed how easily the mesclun mix grows “The cat
sleeps on it and it still grows back!”
“We try and make sure we plant something every couple of weekends,” says Jenny. That way, she explains, there is always something to pick for dinner, although this is more of a challenge in winter than in summer. “Beans and tomatoes are great,” she notes, “because you get so much from just one plant.”

Jenny likes to try new vegetables and will pick up what looks interesting in seedling punnets or seed packets. “Its nice just to go to the garden centre and pick out something we haven’t tried before.” Last year she planted kale for the first time, attracted by the crinkly dark green leaves. “We had so much kale I had to google what to do with it!” she laughs. “It mainly got fried in garlic.” They discovered that the young kale leaves are best for stir-frying, while the older leaves got put in soups and casseroles.

“This year I might grow more from seed, but I find it more time consuming. It feels like more work.” Last spring she grew striped beetroot from seed with mixed results. “I tried it in peat pots but the peat pots didn’t rot down fast enough. This year I want to try growing my beetroot seedling in toilet rolls.”

Recycling is a way of life in this family. The playhouse William is building for Estelle is to be built entirely of found and recycled materials, hence it is an ongoing project. The fact that it isn’t quite finished seems unimportant to Estelle as she relishes the opportunity to show it off, but William has plans for a spouting water tank that will collect rainwater for Estelle to water her playhouse flower garden.

In the vegetable garden, the raised beds and plant supports are all made from recycled materials, mainly rescued from around their own property. An old wooden playpen keeps the cats off the corn and cucumbers grow against old steel balustrades. Old carpet is used as a weed barrier and mulch. Jenny gathers Eucalyptus leaves from elsewhere in the garden to mulch her vege garden paths, which she notes, “smell yummy.”

Saving money is definitely a key reason Jenny and William choose to grow their own food, and they aim to do it as cheaply as possible. However, economics is not the only motivator; Jenny is clear, “They just taste nicer”. She gardens for her daughter too; “Estelle gets to know where things come from,” she notes, adding “my Dad always had a vege garden. My grandparents too. I have memories of getting told off by my grandfather for picking all the cherry tomatoes!” This summer Jenny has grown a mountain of red (‘Tumbler’) and yellow (‘Sunshine’) cherry tomatoes in patio pots. Jenny measured her success; “400g per day!”

Jenny also takes pride in inspiring others to garden. “I like to think I’m getting the people at work into gardening,” she enthuses. “I get my salad out and tell them everything here is from my own garden!” 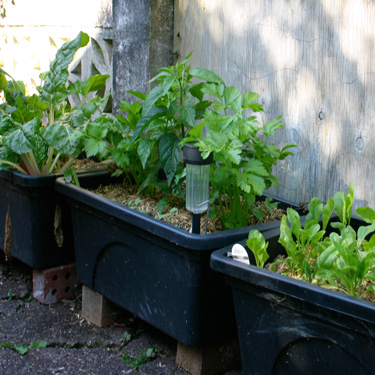 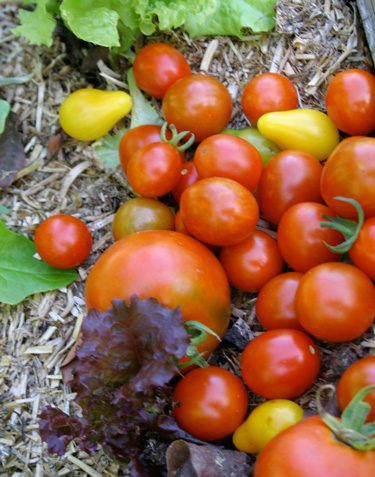 Jenny picks tomatoes throughout summer and autumn; she experiments with a range of tomato varieties. 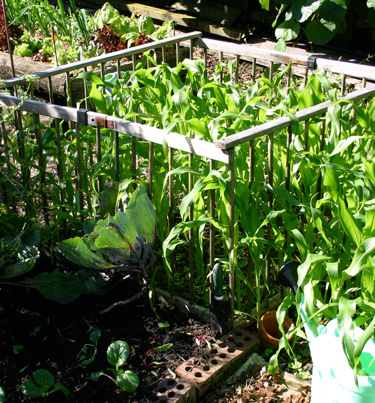