Christchurch’s inner city may still feel like a warzone, but in the years since the quake, there’s been some significant greening going on, and it’s not just weeds filling the cracks. Dedicated planting projects are bringing beauty and purpose into vacant spaces as they await their rebuild.

Greening the Rubble is a charitable trust that rose out of the Christchurch earthquakes. The trust creates and maintains temporary gardens designed to be moved from site to site as the need arises.

The gardens, which are created in line with the wishes of landowners and local communities, range from ‘mini parks’ and simple inner city sitting areas to larger parks, play areas and community food gardens. Projects involve local volunteers as much as possible, both in the installation stages and ongoing maintenance.

Greening the Rubble brings together people from a wide range of backgrounds, including landscape architects, landowners, volunteer gardeners, government bodies and commercial sponsors. Partner organisation, ‘Gap Filler’ makes use of Greening the Rubble spaces for arts events and performances, breathing further life back into the broken city centre.

A stone’s throw from Cathedral Square, on the corner of Colombo and Gloucester Streets, there is a ‘Sound Garden’ created in conjunction with Gap Filler and opened as part of Festa (the annual Festival of Transitional Architecture). Here a charming variety of musical instruments, installed for the public’s enjoyment, are made from recovered and recycled materials.

On the corner Madras and Salisbury Streets is a pretty NZ native garden that must soon be moved to make way for redevelopment, but since 2011 has been enjoyed as a public leisure space. This garden features a petanque court, a rainwater swale, and a children’s sand pit. Until recently Biscotti café traded next door. Local ‘Peterborough Village’ residents helped to care for the site and held events there.

Across the road from the library on Peterborough Street is a Greening the Rubble mini-park featuring brick- filled gabions and metal planter boxes with Kowhai trees loaned by the Christchurch City Council.

By Latimer Square there is a nature play park built in partnership with the Department of Conservation. It features a mini braided river, Canterbury Plains style, and is planted entirely in drought tolerant Canterbury natives.

In particular, Greening the Rubble is concerned with building biodiversity within the city. Enhancing the green life of city spaces was something many were keen to see happening, even before the quakes. Greening the Rubble offers inspiration for urban communities everywhere, whether we find ourselves recovering from a natural disaster - or not.

Find out more at www.greeningtherubble.org.nz

Greening the Rubble triumphs at the flower show

When the Ellerslie International Flower Show is over for another year, most of its gardens live on only as photographs. But every so often there is a garden with a purpose beyond the show.

Greening the Rubble’s beautiful ‘Pod Oasis’ was last seen at the February 2014 show in Christchurch’s Hagley Park and is about to be reassembled in the ReStart container mall in the central city.

Landscape designer Jonathan Hall and horticulturist Gina Payne were the creative force behind this garden, which proved to be a favourite among visitors and was awarded ‘Silver Distinction’ by international judges.

Built off-site, the circular shelters represent the seed of the kowhai - a symbol of regeneration. Yellow climbing beans and purple aubergines picked out the colours of the painted pods and their exquisitely crafted curved seating.

A ‘naturalised’ planting scheme among stones and rubble reflect the derelict reality of Christchurch’s abandoned sites with artful arrangement of grasses and perennials, their informal wildflower appearance reminding us that even weeds can be beautiful. 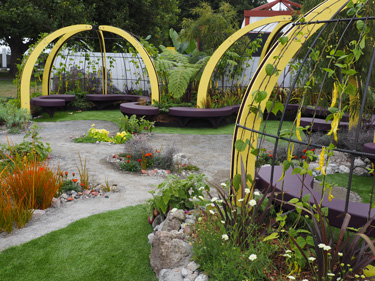 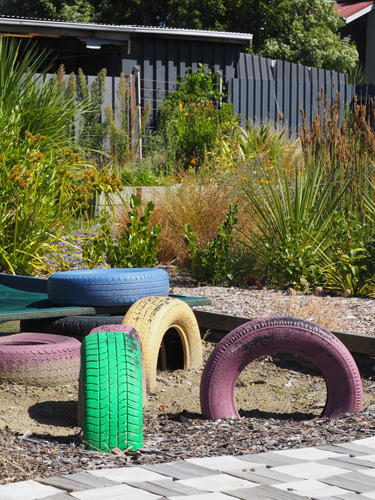 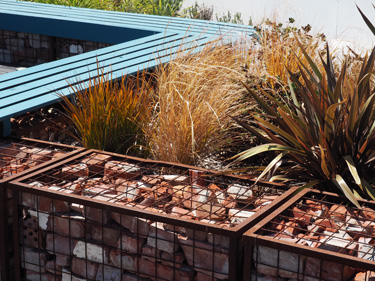