Bringing the outdoors in

Sue Linn finds a beautiful Nelson garden designed to be enjoyed as much from indoors as out.

Adrienne Lorimer has cultivated a number of different gardens over the years, some of them quite large. But when she and husband Duncan moved from Christchurch to sunny Nelson, their vision was clear. “Now that we’re getting older, we wanted a small, easy care garden”, says Adrienne.

As well as a new garden, they were building a brand new house and were able to make the most of the opportunities that come from starting from scratch. For example, as Adrienne explains, “When the house was in the design stage we decided to have windows down to the floor in the downstairs rooms so it would feel like we were almost in the garden.”

Although the top level of their two-storied house gives them the most panoramic views, Adrienne and Duncan decided they wanted their living room and master bedroom suite to be downstairs, for easier living if the stairs became an inconvenience in older age.

Their downstairs view of sea, sky and hills forms an idyllic backdrop to Adrienne and Duncan’s colourful and beautifully maintained garden. And it seems that every window frames a picture- perfect scene.  “We do enjoy looking out at the garden from most of the windows in the house, and love the sea view that changes all the time with the tides.”

Adrienne has chosen a planting scheme of mainly green, white, soft yellows and blues to complement the view rather than distract from it.  There are occasional splashes of colour such as her deep apricot ‘Sunny Honey’ and ‘Mutablis’ roses. Pathways and pots are in soft natural colours.

To help them with the garden layout, the couple  consulted landscape designer, Nigel Monk, who drew up the plan for the garden and also implemented it. They’d planned to do all the work themselves but Adrienne had a hip replacement just weeks after they shifted into the house and, “Once we saw Nigel and his assistant doing all the hard work we realised such heavy work was beyond us”, she says. The landscapers leveled the section for the lawn and put in the retaining rock wall. They also built a raised vege garden, installed the trellis fences, and laid the path and lawn edgings.

A couple of steps up from the pea gravel pathway on the east side of the house lies a flat area of lawn. How do they keep it so smooth and green? “The lawn was readylawn so it looked good from day one,” tells Adrienne. “We strive to keep it well watered in the summer. To keep on top of dandelions and other weeds we both spray and dig them out with a special tool we got from Mitre 10. Duncan also puts lawn feed on every year”.

The garden is now four years old and they’re delighted with it, even though Adrienne agrees there are some concessions you have to make when you’re a keen gardener with less space than you’ve enjoyed in the past.

“I think with a smaller site you have to identify your favourite plants and try to limit the number of different species.” If she had more space she’d grow her favourite hydrangeas and favourite trees such as dogwood and variegated elm.

“Also you need to make sure your plants are appropriate for the growing conditions of the site,”, stresses Adrienne. The soil is poor and with hindsight they wish they had brought in a big load of topsoil when the garden was laid out.  “It didn’t occur to us until after it was all done!” she confesses.

As well as imperfect soil, they have wind to contend with. “Because we are very exposed it has limited our choices in plants, trees especially. I would have loved to have had lots of maple trees but they don’t do well up here in the wind.”  Mainly, they have planted native trees, such as Pittosporum, Griselinia and pukas, which are doing well. Three ‘Little Gem’ magnolias are also doing well, although as Adrienne explains, “when it’s very wet in the winter we get a lot of runoff from the section behind us, which causes the magnolias to drop more leaves.”

In summer they have the opposite problem when the garden gets very dry and Adrienne spends a lot of time watering. An automatic watering system would help, she notes. “We are lucky that we installed a tank to collect the roof water so we always have that to use on the garden and I don’t feel like I am using up the natural resources”.

Low maintenance was an important part of the design brief for this garden, but Adrienne and Duncan enjoy the time they spend in it. Duncan does the lawns and any heavy work while Adrienne does most of the planting and general maintenance.  “We have bark mulch on all the garden beds so weeds are easy to keep under control.  I pick out weeds when I see them as I walk around the garden. Apart from early spring and late autumn the garden doesn’t take much time to keep, but I do like just pottering around in it to keep it tidy.”

A raised vege garden is nestled neatly behind a fence in a sunny corner of the garden. They love the fact that the raised beds make it so easy to plant, cultivate and harvest.  “We grow lettuces year round and cherry tomatoes in the summer.  We also usually have perpetual spinach growing, as it does very well and is handy to have.  We grow radishes, dwarf beans and strawberries.  This year we have also planted leeks and celery, which are just about ready to harvest.”

Adrienne says she finds gardening very relaxing, adding “there is also a lot of pleasure gained from looking out the window and marveling at the things each season brings – for example the tulips, cherry blossom and the michelias in spring!”

GG: What are some of your favourite plants?
Adrienne: “I am very fond of my Michelia yunnanensis, which are covered in gorgeous pale cream flowers in spring.  I also have two gordonias, which are taking off and have flowered well this winter. I love roses, and am very fond of hydrangeas, although I don’t have any!   Lack of space is the main reason.  I am keen on maples but only have one very poor specimen, which had to have the centre cut out after last winter as it was very wet.  I’ll give it one more year to look better or it will have to be replaced! If I had a bigger garden I would have more trees such as Cornus and variegated elm.”

GG: Which are the gardens/gardeners that inspire you?
Adrienne: “Like many others in the past I admired the garden at Sissinghurst as well as Beth Chatto’s garden.  I would love to have a true Japanese garden, which I think are so beautiful – they are so calm and yet so alive.”

GG: What would you consider to be the biggest challenge in the garden?
Adrienne: “For me nowadays it is learning to pace myself and not do too much at once.  A little bit often is better. I suppose the golden rule of gardening applies everywhere – choose plants that are suitable for the site and the local climate.”

GG: What advice would you give a beginner gardener?
Adrienne: “Have some sort of plan for the bones of the garden; the hard landscaping, and the trees and shrubs and get these planted first.  Keep it simple with lots of repeat planting for a garden that will always look good.” 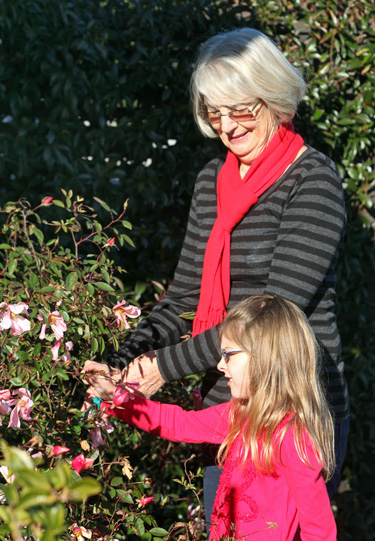 Adrienne and Greer with Mutablis rose 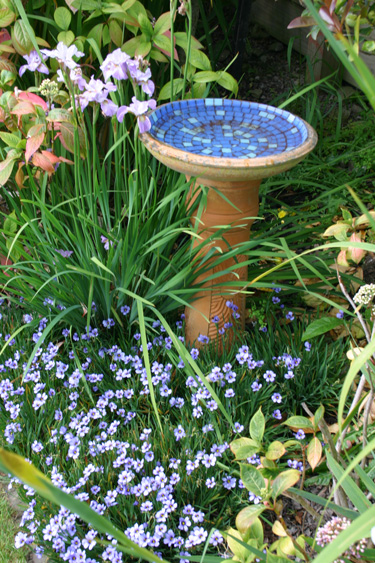 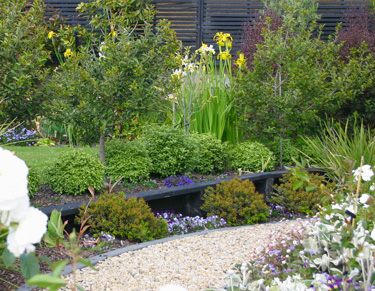 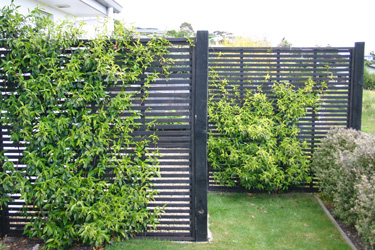