Wainui School is at the heart of a small rural community 10km west of Orewa in Auckland’s Rodney district. The combined primary and intermediate school, whose roll numbers only 200, now boasts a spectacular new garden.

Over the past six years, Project Crimson and the Mazda Foundation have worked with 23 schools throughout the country to encourage children to take pride in their environment and their native flora. Each year, four schools are chosen to have their grounds improved and enhanced through the planting of native trees. In 2014, Wainui School, along with Cromwell Primary School in Central Otago, Naenae School in Wellington and Pegasus Bay School in Canterbury each won a $10,000 Treemendous makeover.

Integral to the Wainui School project were school principal Gillian Bray and parent Robyn Dyer, who has a landscape design background. Both women are passionate about the native environment and the use of native plants. “Gillian knew of Project Crimson and filtered the opportunity through to the community via the student council,” explains Robyn. To apply for funding, the school had to put forward a proposal that used native plantings to create an educational area. To gain the funding, the proposal needed to have something that made it special and stand apart.

“It helped that I was studying a botanical paper towards my Bachelor of Applied Science. My particular area of research is ethnobotany and the children really engaged with it,” says Robyn.
Ethnobotany is the study of the relationships between peoples and plants.   It explores the traditional use of native plants by indigenous people and is the philosophy that has guided the transformation.

“The principles of ethnobotany were integral to the project,” says Robyn. “We decided to use exclusively native plants that had been used by Maori in a traditional way. For example, Koromiko (Hebe stricta) was used by Maori for medicinal purposes and Nikau palm hearts were a source of food. Everything in the garden adhered to this practice,” explains Robyn.

The concept for the garden space was submitted and the school was advised that they had been successful. The large space connects the playground to the classrooms through a series of paths and gardens. The 1500 native plants are each identified with signage detailing their Maori name, Latin name and how it was used by Maori. The children named the garden ‘Matauranga’, an appropriate moniker for such a multi- faceted amenity as Gillian explains.

“Matauranga means education, learning and knowledge. The garden works on many levels. It’s instructional, educational and practical. It not only functions as a space for the children to play in and access their classrooms, it’s also a learning resource where the plants are used by the children. For example, during Matariki week celebrations, the children wove kites and kete using the garden’s toetoe and flax.

“Previously, this area was completely unused so we are excited to have restored the bush close to its natural state. This new garden will also allow the students to learn about the environment with a hands-on approach.”

The Treemendous School Makeovers are completed by the travelling Treemendous team, who along with the school and the local community, work tirelessly for one day to create the garden. For Wainui School, that day was in May this year.

“More than 100 students, teachers, parents and other members of our community turned up to dig and plant. It was a fantastic turnout and with so many people helping, the planting happened very quickly,” says Robyn.

In line with ethnobotanical practice, all of Matauranga’s plants were ‘eco-sourced’ meaning the plants came from the immediate area to ensure a genetic base suited to local growing conditions.
When asked about her favourite slice of Matauranga, Robyn’s answer is surprising. “It’s the slide coming down into the garden. It had been decommissioned by the school, but one of the kids suggested incorporating it into the design to use as an access point into the garden. It’s fabulous!”

As part of the funding agreement, Project Crimson asks the schools to provide an on-going maintenance plan. For now, the garden is looked after by the school’s caretaker and a newly created environmental group called the Wainui Tree Huggers are going to come on board to help maintain the space.

Now that the garden has been brought to life and is being used on a daily basis by the children for learning, playing and relaxing, Robyn is turning her sights on her next project; setting up a sustainable living centre in Rodney, which she aims to open by March 2017.

Robyn hopes Matauranga will continue to connect children and adults alike with nature. “The garden has educational impacts but it’s also very beautiful to look at. Using it every day helps the children develop a sense of love for the environment and native plants, which is a great thing.”

The Project Crimson Trust in partnership with the Department of Conservation was established to fight for the survival of rata, pohutukawa and other native species.
The charitable trust works with organisations, communities and individuals throughout New Zealand assisting them with funding and resources for local projects; planting and maintenance, scientific research, possum control and public education.

Pohutukawa and rata belong to the myrtle family (Myrtaceae) which is made up of about 3000 different tropical and warm temperate trees, shrubs and vines. Family members include New Zealand’s manuka and kanuka plus many exotic plants (e.g eucalyptus, feijoas, guavas and bottlebrushes). 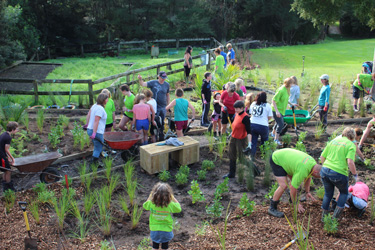