Every week there is news of severe flooding, massive landslides, sink holes and people losing their lives as a result. We may blame climate change, storms that happen with seeming increasing frequency and ferocity, and our cities and their infrastructure are failing to handle the deluge.

Beneath us, unseen, the underwater aquifers that rely on water from the surface to replenish them, are drying up because we are draining them too quickly and impervious city surfaces prevent the water from percolating down to re-supply them.

Before there were cities and farmland, there were forests and tussocks.  The trees and grasses would catch the rain so it would filter slowly down to the ground. What water the plants didn’t trap with their roots, the carpet of leaf litter would absorb, and slowly release to the streams, rivers and aquifers.

Now our cities are paved in impermeable surfaces – buildings, footpaths, parking areas, roads – and there are very few gaps in the ‘veneer’ for water to escape naturally. So rain is forced into gutters and down storm water drains which are becoming less able to cope with the increasing ferocity of these floods.

The storm water also carries pollutants and man-made rubbish into our streams and rivers, affecting the quality of the water and life in these waterways.

By using plants wisely we can reduce the effects of heavy rain events, and create a nicer environment to live in. 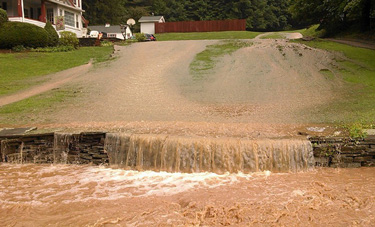 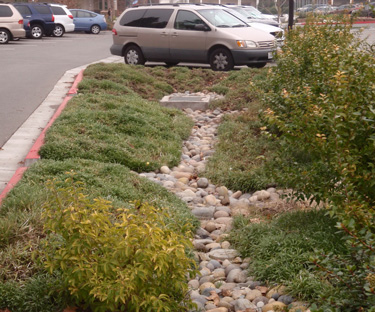 A vegetated swale designed to collect storm water from the carpark.