Roundabouts and traffic islands – unassuming objects strategically placed on a street or highway to control traffic flow. They may be large or small, raised or flat, concrete or green. The manner in which a roundabout is treated may well depend on the local authority under whose jurisdiction it falls and its purpose for traffic control.

The ingenuity by some local authorities to use roundabouts and traffic islands to beautify their towns is commendable. For example, in 2009 State Highway 2 through the rural town of Carterton in the Wairarapa, underwent a major makeover, resulting in numerous small traffic islands. These not only improved the safety for pedestrians and drivers but have been utilised as gardens by the local district council. The seasonal displays of flowers are admired by residents and visitors, with many stopping for a closer look and taking in the local shopping.

In Masterton, just up the road, drivers approaching from the north are greeted by floral displays on a grand scale. A traffic island separating four lanes of traffic and traversing the Waipou river bridge flaunts a floral spectacle that often reflects a local event. For example during the Rugby World Cup 2011, the islands were planted in flowers of the national colours of Georgia, the team hosted by Masterton.

In 2014, a new roundabout was installed during the upgrade of the intersection of state highways 1 and 5 at Tirau. The roundabout is used to feature a 7m high Hinuera stone monolith and two oak trees, and under planted with shrubs and grasses.

Meanwhile, at the northern end of the Wellington Airport runway, the large Cobham Drive roundabout is home to “Pacific Grass” a wind sculpture in the Meridian Wellington Wind Sculpture series, and a family of rabbits.

There are hundreds more examples of roundabouts in New Zealand being used to feature plants and art, and provide refuge for animals and insects.

There are practical and safety issues to be considered. The layout of beds on a roundabout has to take vehicle sight lines into account, with tall planting kept towards the centre, so cars can see what’s going on around the edges. And the cost of maintenance has seen councils moving away from seasonal bedding displays in favour of dry beds, perennials, grasses and native shrubs. A perfect example of this is the large roundabout on George Bolt Memorial Drive near Auckland Airport which is landscaped in strips of river boulders, paving and hedged Griselinia.

Overseas, while roundabouts and traffic islands also fall under the control of the local authority, community groups have arisen which “adopt” and look after roundabouts in their neighbourhood. The result has been a more attractive street for residents but also a mechanism to get strangers together as neighbours as they all pitch in to help.

In addition, this form of adoption has mutated into a revenue stream for authorities as local businesses take up sponsorship of roundabouts at larger intersections. The business gets to place their corporate signage in the middle of a busy roundabout, and to have the roundabout planted, beautified and maintained. It has become big business and the influx of cash has turned once dreary roundabouts into innovative horticultural displays.

Britain even boasts the existence of the United Kingdom Roundabout Appreciation Society (UKRAS), and there is a definite Kiwi connection. The Basin Reserve in Wellington, caught the eye of UKRAS as one of a selection to use in its first Roundabouts of the World calendar. The Basin is in fact just an oversize roundabout (although a little square in shape) that just happens to have a cricket ground in its centre, and is possibly the largest roundabout in the southern hemisphere.

Next time you’re out, take a closer look at your neighbourhood roundabouts – but do drive carefully! If they need a spruce up contact your local council, and find a new appreciation for these islands of green in a sea of grey. 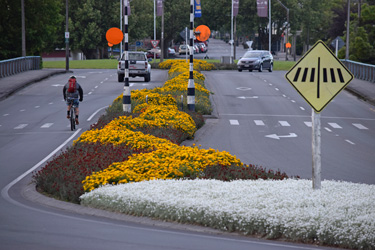 Traffic islands at the north end of Masterton