Gardens in the sky

Green roofs provide a host of advantages for city living

Green (or Living) roofs have been mentioned before in this column (Weekend Gardener issue 383) and are becoming increasingly popular across the world, particularly in Northern Hemisphere cities. This is because of the incredible number of benefits which plants on a roof can lend to the occupants of the building and to the wider community and the environment.

Despite the proven benefits of green roofs, there is a perception that they are too hard to implement. Concerns include high installation costs, the weight, maintenance and doubt over their effectiveness. In New Zealand a small number of inner city green roofs have been installed, examples being Pipitea Plaza Wellington, NZI building Auckland, Waitakere Civic Centre Auckland and both the Auckland and Otago Universities. Christchurch City Council has included green roofs in their Draft Christchurch Central City Plan, and it is proposed to encourage living roofs and walls in the Central City.

There is no direct legal requirement to provide a green roof in New Zealand, but anywhere a new building is planned, and Christchurch has the greatest opportunity, we should advocate with town planners and building architects to include green roofs so our cities can reap the benefits. 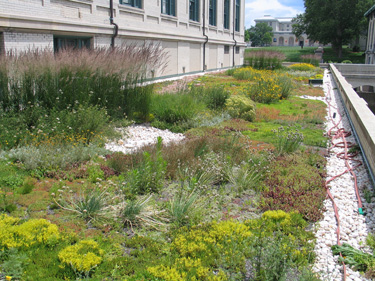