A man of all seasons

Barry Ferguson has had a passion for flowers, plants and gardens since his early memories of following his mother around their garden in Dunedin.

He opened a flower shop in Christchurch when he was 21 and had a regular slot on the radio, ‘Flowers with Barry’, when he was 23. He then left New Zealand to see the world and chase his dreams, landing-up in New York where he stayed for 30 years.

In New York, Barry designed gardens and floral installations for special events. A combination of timing, good luck, hard work and chutzpa gave him unique opportunities. David Rockefeller, Horst, Malcolm Forbes, and many other New York glitterati were his clients.
Barry eventually set up his own business and lived for six years in a cottage on a large estate on Long Island, New York. While there, he created a romantic flower garden. “Guests of the main house were often seen, drink in hand, enjoying a fragrant, evening garden stroll,” he writes in his memoir, ‘Flowers Are My Passport’.

When it came time to buy his own home, Barry fell for a half-converted Roosevelt barn, with stables and gatehouse, on 1.5 hectares of over-grown woodland in Long Island’s Oyster Bay. Renovating the barn was a challenging task but creating, then tending, his extensive woodland garden was his after-work passion.

Barry enjoyed what the garden offered in all seasons. “Deciduous oaks, with dogwoods a storm of white blossom in early spring, then hyacinth, daffodils, primulas and azaleas bursting forth in profuse colour. The trees provided cool green shade as summer rolled on, with fragrance from lilac and roses and intense colour from peonies. Summer turned to autumn with asters, chrysanthemums and berries heralding the fiery explosion of colours from oaks, ash and dogwoods. Trusty evergreen firs stood tall and strong in the white of winter, allowing the garden to rest and me to travel to warmer climes.”

A heart attack when he was 70 was the warning sign that Barry needed to slow down, so he came home to New Zealand and started work on his final garden in temperate Mahurangi. “It’s totally different from Oyster Bay and I appreciate a garden that gives flowers every day and thrives all year round. There is much more variety here but I dearly miss my cold-climate favourites and the seasonal contrasts.”

Barry’s Mahurangi garden will never be on the garden-visit circuit – there’s not a single box hedge. It’s a steep and difficult site and it struggles with notoriously solid Puhoi clay, but he has worked with it, cajoled, tended, adding truckloads of chicken manure and lime. The end result is an eclectic garden designed to provide flowers, fruit and vegetables in all seasons. “Terracing was necessary in many places, and that can be costly,” he says.  “I had an excavator create diagonal paths through the steep orchard so I can walk there freely and drive the ride-on, with a trailer of mulch behind.”

The exotic-plant gardens merge happily with the native bush in the valley that surrounds the house. Hundreds of clivia, when flowering in September and October, form a carpet of colour in the shade of manuka trees, then foxgloves bloom beside the rimu trees in summer. An unusual Himalayan Agapetes plant sits in a Chinese pot below a ponga.

The garden is filled with flowers that Barry particularly loves. These are often unusual and intriguing, frequently perfumed. Each plant, each bloom, is an admired and appreciated friend.

Barry knows the botanical names of the many different plant species in his garden. He knows where they thrive and when they need water and feeding.

Barry lives surrounded by flowers. They don’t stay in the garden but are brought indoors to be enjoyed. There is a vase of his favourite roses on a bedside table, the kitchen window sill has a row of individual blooms in small vases so he can enjoy them while peeling potatoes and his bathroom has a glass wall that joins a conservatory where the orchids seem to merge seamlessly with the staghorn ferns and bromeliads.
Under the carport roof colourful hanging begonias are enjoyed every time he gets in out of his car and, in March, the canopy is perfumed by the waxy, white blooms of Stephanotis, a favourite flowering vine from Madagascar.

Flowers in other forms dominate the décor of his house. Floral paintings, botanical drawings and floral wall paper and couch and chair upholstery all have a place.

It’s not twee, or cluttered, but it is clear, once visitors have become used to the magnificent view of the Mahurangi Harbour, that he is obsessed with flowers.

Barry is 85, is a bachelor and always has been, and he now lives with his older sister, Nancy.  Flowers are the great love of his life. He sees God in a rose, the miracle of creation in a translucent cactus bloom and the reason for hanging on and returning for another season in the late summer flowering of scarlet nerines.

Barry Ferguson’s recently published book, Flowers Are My Passport is readily available from better bookstores. He is a terrific raconteur and the beautifully presented book is a delight to read. 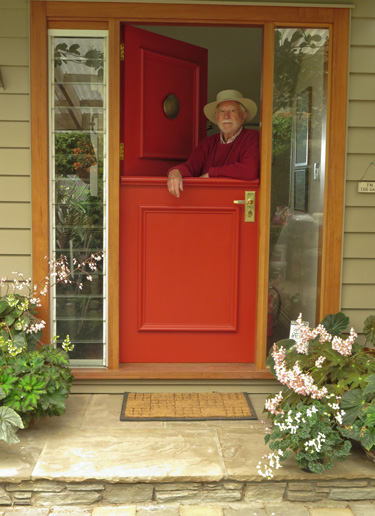 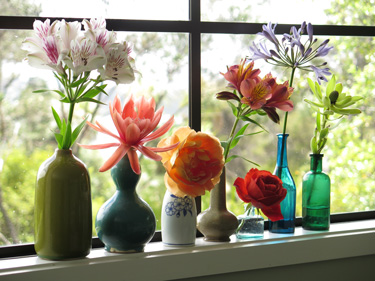 A charming display of flowers in an eclectic row of vases 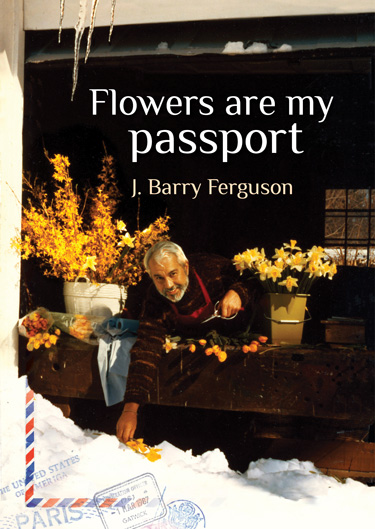 Flowers are my passport