There’s plenty to think about when designing a play space for young children. Sarah Thornton talks to the professionals behind a much loved kindy garden in Hawkes Bay.

For landscape designer Aaron Williams, designing children’s play spaces is a new challenge in his career.  More used to working with a high-end clientele in London, he has now been enlisted to design outdoor spaces for New Zealand kindergartens.

In the Hastings suburb of Flaxmere, Irongate is one of three local kindergartens serving the local community.  It is a traditional state-funded kindergarten with a role of 40, primarily made up of Maori and Pacific Island children.  Aaron was enlisted by head teacher Raewyn Read Eden to re-design Irongate’s outdoor spaces after she saw the work he’d done in his business By the Olive Tree Landscaping and at another local kindergarten, Camberley.

“We had an outdoor space that wasn’t working for the children,” says Raewyn.  “The sandpit was small and quite shallow, and only catered for four or five children playing in it at one time.  We started planning a new outdoor area - one that was more conducive to sustained play.”

Raewyn’s brief to Aaron was clear.  Stage one was to create a sandpit area that was as large and deep as possible, with several different play zones.  Stage two would involve transforming some tired outdoor play areas and revitalising the garden.

“When we met with Aaron, we felt he ‘heard’ our vision.  With the sandpit, what we ended up with is a fantastic, creative area that contains decks, platforms, a concrete structure with water and numerous different spaces to encourage independent or group play.  The importance of well designed outdoor areas for children cannot be overstated – they need to encourage exploration and be ‘open ended’, not prescriptive so children have the freedom and opportunity to explore working theories they want to look at,” says Raewyn.

It was also important to the kindergarten that the design of the gardens and play spaces reflected, and were relevant to its community.  No longer the domain of primary colours and astroturf, Irongate is a good example of the changing face of early child care education environments, now more focused on utilising natural materials in their surrounds.

“With its Pasifika and Maori client base, I wanted to incorporate cultural elements the children could identify with,” says Aaron.  “We have a fale in the sandpit, I’ve used stenciling of cultural motifs and natural materials like tree stumps as seats, and even the bike racks are made from timber.”

Irongate sits in a lower socio-economic community and giving children access to experiences was also an impetus for the re-design.  “Being urban, a lot of these children don’t get the opportunity to go to the rivers or beaches, so it was my job to bring that into the play areas,” says Aaron.  “I brought in a Pasifika feel with the waves, the sand and the fales.  We even have a little of the South Island in the design, bringing in flat Schist stones from the mainland.”

Aaron says there was “no particular planting brief”, just to avoid any noxious or poisonous plants or trees.  A plant’s texture was also a consideration, with spiky plants out for obvious reasons.

“While I created some new plantings, there were also some existing spaces to be planted out.  I used a lot of native grasses and plants that suit the environment.  Grasses are drought resistant, hardy for play areas and also soft enough to be trodden on and hidden behind and will still survive. Chionochloa, miniature Toe Toe and Carex testacea were ideal.  I also planted some flaxes that the children could then use for harakeke (weaving).

“Hebes add pops of colour and also attract bees – observing the bees at work has been a great learning experience for the children.  One of the key things for me was to make the environment familiar.  I used common native trees and plants like cabbage trees; nature that the children will   recognise when they’re out and about.  They’ll see them and remember them from their time at Irongate,” he adds.

Aaron has created a range of spaces, some small and intimate, others expansive.  Each has its own texture and shape using a variety of materials including grass, concrete, timber, stone and rocks.   A large grass area ensures the children can burn off energy and hold their own rugby and soccer games.

Raewyn says that there has been a noticeable change in the children’s play in the newly created outdoor areas.  “They are inventive, creative and most of all very respectful – there’s no walking through the gardens or picking the flowers. Aaron has created an environment for learning that challenges the children on different levels.  They have learned the importance of plants to life.  We have a swan plant and that was mammoth for the children’s learning to observe an entire life cycle.  They were even more enthralled when a praying mantis ate the newly hatched butterflies!” laughs Raewyn.

It is not only the children who are benefiting from this garden transformation.  The positive effects are being felt by the broader Flaxmere community.

“For the wider whanau, they get to share in an environment that is welcoming and embraces their culture.  There are areas where adults can sit and share in the play.  The landscaping identifies with their whakapapa,” adds Aaron.

Initially, designing spaces for children took a very different approach than Aaron had been used to, but one he relished and has used since on a number of early childhood centre landscape designs and installations.  “I enjoyed a great relationship with the children while I was working and got them involved with several tasks.  We’d talk all day about what I was doing.  It was education through gardening.”

“Aaron was like the pied piper,” quips Raewyn.  “He was happy to work with the children’s involvement.  And what we’ve ended up with are magical spaces that are environments for learning and also places for children to challenge themselves.  It’s brilliant.” 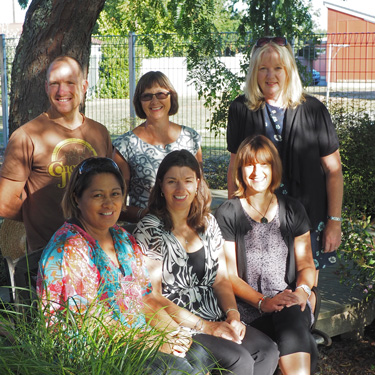 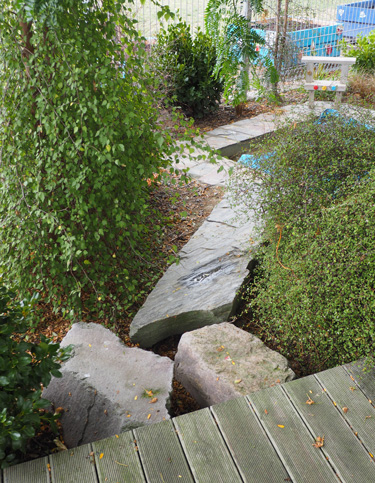 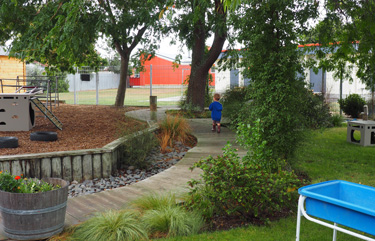 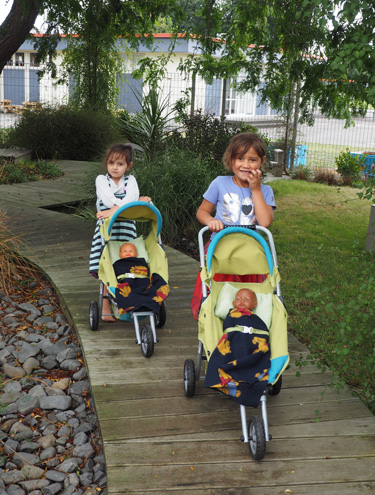