Since first detected in New Zealand about nine months ago, myrtle rust has been found in six North Island regions.

Field surveillance teams are out searching for signs of the disease and working to control it and slow its spread into new areas. However, it is too early to know exactly what will happen and how the disease might affect New Zealand. So far, the fungus appears to behave differently from region to region, and even plant to plant.

The Ministry for Primary Industries (MPI) is starting to adapt its approach in regions where levels of infection are high and new infections are frequent. In these regions, properties with infected myrtles will be assessed case-by-case and, where appropriate, some property owners will be given responsibility for making decisions and managing their infected trees themselves. MPI is continuing to support them with information and advice, and, if needed, secure collection of potentially contaminated green waste.

The myrtle rust fungus produces spores in warmer weather so it’s a good time to check your garden for any sign of it on your myrtle plants. Soft, new growth – leaves, buds, shoots and fruit – are especially susceptible. Look for:

Don’t touch the plants – even if there’s no visible infection, you might disturb and spread the microscopic fungus spores.
If you suspect you have an infected plant, take some photos, of the infection and the plant, and call the Biosecurity Hotline: 0800 80 99 66. They’ll tell you what to do next.

Not sure if you have any myrtles? Download and check through a list of plants in the myrtle family.

For more about what’s being done to control myrtle rust in New Zealand, visit MPI’s website.

For those of you out and about and in the garden, continue to keep a look out for symptoms of Myrtle Rust and report suspected Myrtle Rust to MPI

If you are in a region in close proximity to the affected regions or likely to be affected (scientific modelling suggests that this will be the North Island and Tasman regions) we recommend you follow Project Crimsons’ lead to defer planting any Myrtaceae plants. This is because myrtle rust symptoms may not develop on infected host plants in the current winter conditions (myrtle rust prefers temperatures over 10°C), and therefore symptomless plants may be infected with myrtle rust. Movement of plants could unwittingly move infected plants to new locations, spreading myrtle rust further. By late spring, the health of susceptible plants will be much clearer.

Symptoms to look out for on myrtle plants are:

If you suspect Myrtle Rust

Do not attempt to touch or collect samples as this may increase the spread of this disease. Myrtle Rust is readily spread by wind and can be transported on clothing, vehicles and equipment.

If you suspect Myrtle Rust:

If you think you have seen this fungus call MPI’s exotic pests and diseases hotline on 0800 80 99 66.
Take a photo - do not attempt to touch or collect samples as this may increase the spread of this disease.

Myrtle Rust has now been found in both Kerikeri and Taranaki. The Ministry for Primary Industries (MPI) and Department of Conservation (DOC) have already put precautions in place to help stop any further spread. They are working with iwi, industry and local authorities to learn more about how this detection can be managed.

Myrtle rust is a serious fungal disease, readily spread by wind, that attacks plants of the Myrtaceae family. It can also be transported on clothing and equipment. If you think you’ve come into contact with myrtle rust spores in New Zealand or overseas, please wash your clothes and clean your equipment (such as boots and tools) thoroughly.

Many New Zealand natives are members of the Myrtaceae family, including Pohutukawa and Rata (Metrosideros), Kanuka (Kunzea), Manuka (Leoptospermum), Ramarama (Lophomyrtus), Rohutu (Neomyrtus), Swamp maire (Syzygium).  There are 29 species in these genera.

The popular feijoa (Acca sellowiana) is also a member of the Myrtaceae family.

All members of the Myrtaceae family must be considered potential hosts of myrtle rust because the fungus has demonstrated in both Australia and Hawaii that it finds new myrtaceous host species which were not known hosts previously.

How you can help

Myrtle rust spores are highly mobile. Like many rusts, they are easily spread across large distances by wind. They can also be transported by infected plant material, on clothing, equipment and vehicles, by insects and in rain splashes. Early detection gives us the best chance of containing an incursion.

We are all part of a team of 4.7 million New Zealanders on the lookout for serious pests and diseases and gardeners are urged to immediately inspect all their gardens and nearby vegetation, especially varieties in the Myrtaceae family.

What to look out for

Myrtle rust attacks young, soft, actively growing leaves, shoots and young stems, and sometimes flowers and fruit. Initial symptoms are powdery, bright yellow or orange-yellow pustules on leaves, tips and stems. The developing lesions may cause a deformation of the leaves and shoots, and twig dieback and plant death if the infection is severe and the species highly susceptible.
Look for:

Rusts of this type are rare on many native species - any sighting should raise suspicion.

What to do if you find it

If you think you've seen the symptoms of myrtle rust, do not touch it.

To prevent rust of any type in your garden, apply preventative copper-based fungicides; but should you suspect you have found Myrtle Rust, do contact MPI FIRST.

More information is available at: 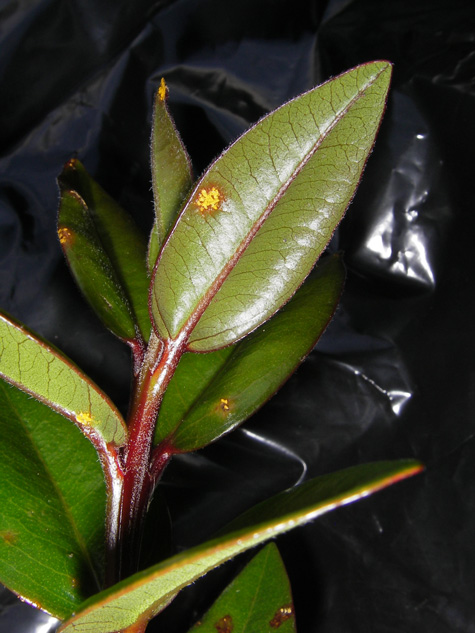 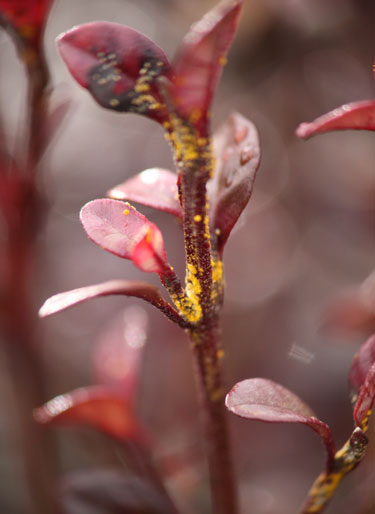 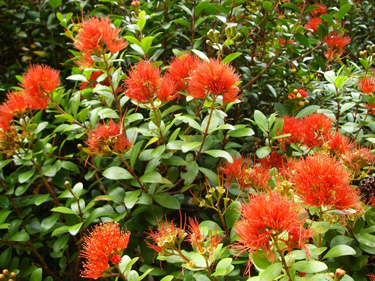