Keeping the fantasy alive at one of our most popular tourist attractions involves a team of dedicated horticulturists.  Sue Linn meets the gardeners at Hobbiton Movie Set.

Driving through rolling green Waikato farmland on the way to Hobbiton, it feels like you’ve already entered Middle Earth even before you reach the famous movie set. Then after a short bus ride from the car park and cafe, you are strolling around the hobbit holes. Excellent tour guides are full of interesting facts about the film making, but you can also stand back and immerse yourself in the fantasy.

It was as if Bilbo Baggins had left the door open during an afternoon snooze. You could almost hear him snoring. Outside Sam and Rosie's place the painted pottery teacups were set out for morning tea and the washing was pegged out to dry. It felt like they would appear, children in tow, at any minute. Such is the realistic charm of what has become one of New Zealand's major tourist attractions.

Much of what makes this imaginary world feel so real are the Hobbits’ gardens. Each one reflecting, as every good garden should, the character of its 'owner'. There is an artist’s garden, a fisherman’s garden, gardens that are clearly owned by the more well-to-do Hobbits, and some that belong to Hobbits who spend time on other Hobbit-pursuits rather than gardening. Most Hobbits enjoy a wholesome laid back kind of living which involves reading, going on walks, and socialising while sharing good food.

“If more of us valued food and cheer and song above hoarded gold, it would be a merrier world.” ~ The Hobbit

Pam Russ is the head horticulturist in charge of the gardens at Hobbiton. She says creating the gardens around the different hobbit personalities is a key focus and an aspect of her job she enjoys. Learning her craft in England, where she grew up, Pam has been on board at Hobbiton since 2009 when construction began for Peter Jackson’s ‘The Hobbit’ movie. She remembers the huge amount of work invested in creating the set for just a few minutes of film. Initially, for the Lord of the Rings movies, the hobbit houses were  built from temporary materials but in 2009, before the Hobbit trilogy was filmed, they were rebuilt out of permanent materials.

Pam says the gardens are constantly evolving, just like any garden but always with the character of their ‘owner’ in mind and in keeping with the ancient-English style. From the start, Peter Jackson prescribed a comfortable, lived-in feel for Hobbiton with weeds growing through the cracks.
Maintaining that look takes more work than most people realise, says Pam. “As much as it looks really random and accidental there is a lot of thought that goes into it.” When it comes to choosing the plants for the hobbits’ gardens, she and her gardeners are given a free rein as long as plants fit the theme. “These days we get away with things that wouldn't have been allowed during filming,” says Pam. Modern cultivars, especially dwarf flowering shrubs that give long- season colour, fit seamlessly with the old English style, but the gardeners must be careful not to include plants that are obviously out of place. “For example Hobbits wouldn’t have had variegated plants.”

It’s nice to see New Zealand native plants in the mix. Informally trimmed corokias and coprosmas, with their fine lacy foliage and grey green tones, fit particularly well among English roses and other old fashioned flowers. “Conspicuously NZ plants like cabbage trees and flax have been ruled out in the past, but we’re now planting these and other natives around outer lying areas around the farm.”

“In a hole in the ground there lived a hobbit. Not a nasty, dirty, wet hole, filled with the ends of worms and an oozy smell, nor yet a dry, bare, sandy hole with nothing in it to sit down on or to eat: it was a hobbit-hole, and that means comfort.” ~ The Hobbit

An important task is keeping the grassy knolls, which form the roofs of the hobbit homes, lush and green for 365 days of the year. Every morning at 6.30am the grass cutters start work trimming the pasture before the guests start pouring in at 8am. “We use weed eaters rather than mowers, which gives the sheep-grazed effect,” explains Pam.

During spring and summer, pop-up sprinklers water the grass and gardens for twelve hours every night, and there are two people whose specific job it is to walk around checking moisture levels and watering the bits the sprinklers miss. Fertiliser is applied by helicopter in spring.

Some staff have started off as waterers, later earning their place on Pam’s team of dedicated gardeners. Tending the hobbit holes as if they were their own, they strive to keep the gardens looking colourful throughout the year. “We have visitors every day except Christmas so we have to have flowers, fruits and veges on display all year round,” says Pam.

Sarah, Pam’s longest serving team member, is in charge of Sam the gardener’s garden at Bagshot Row. Mathias is in charge of the ‘Wedding Hole’, a hobbit home and garden designed especially for weddings. Couples can have their ceremonies and photos here and it can all happen while the tours are going on. There are enough hobbit holes and gardens on the 5.5 hectare site that different areas can be roped off for a time, which also allows for maintenance work and protects pathways from overuse.

Last year Hobbiton Movie Set welcomed over 460,000 visitors and won top honours in three categories at the NZ Tourism Industry Awards in September. Most of the visitors are international. Clearly many kiwis have yet to discover this gem in our own back yard. Find out more at www.hobbitontours.com

Seen in a hobbit’s garden 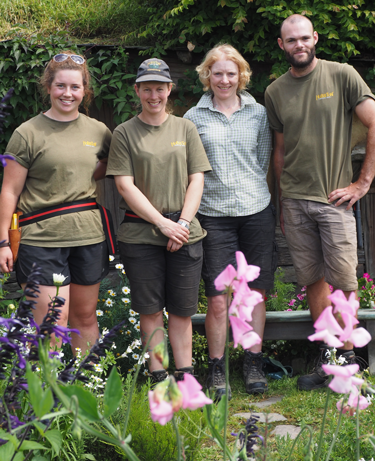 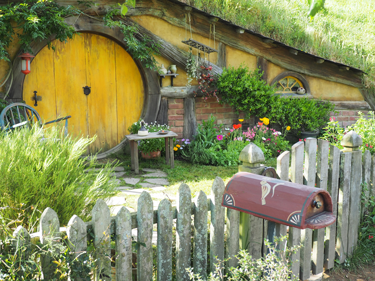 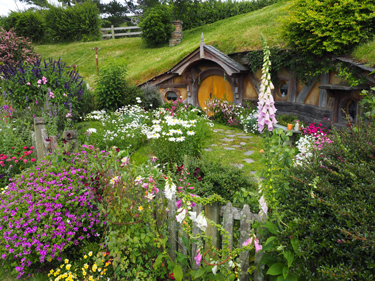 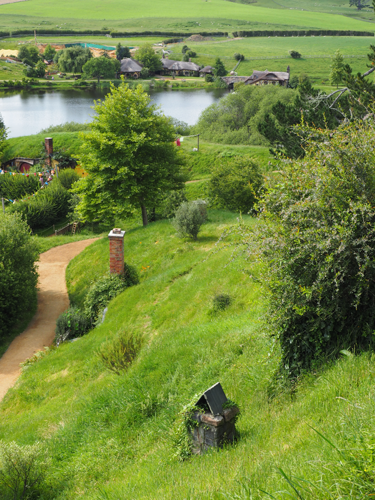