I had always taken great pride in my tomatoes. That was before 2009 when we moved to Hawke’s Bay. Little did I know a devastating new pest had arrived in the neighbourhood just a few years before me.

My neighbours warned me it would happen. They’d lost an entire paddock of potatoes the previous summer. But I was shocked at the severity of the attack and have been battling with the Tomato and Potato Psyllid (TPP) ever since.

This tiny sucking insect attacks tomatoes, potatoes, capsicums and tamarillos. In fact it lives on any plant in the entire tomato family, including ornamental plants and weeds. If sap sucking was its only crime it might not be so bad. A healthy tomato plant would likely tolerate it in the same way it can shrug off a troop of aphids. But what makes TPP most devastating is the fact it injects bacteria into the plant as it feeds. Evidence of this is seen as stunted distorted growing tips in sickly shades of purple and yellow.

A female psyllid can lay up to 510 eggs over her lifetime.

Seen mainly on the backs of leaves, the adult culprits are very small but their striped cicada-like bodies are visible to a sharp eye. About 3mm long, they jump when disturbed. With the help of a magnifying glass, you can easily see the little yellow eggs on the leaf margins and scale-like nymphs in various stages of growth on the undersides of leaves. In the early stages after hatching nymphs are mobile ‘crawlers’ before settling down to feed and grow wings and become adults within three weeks.

Most conspicuous, especially in high summer when the attack reaches its peak, are the white ‘psyllid sugars’. This psyllid poop should leave you in no doubt that you have a problem.

As with any pest, the more we know about the enemy, the easier it is to deal with. The trouble is when a new one catches us unawares, scientists are left scrambling. The cost of TPP to NZ horticulture has been mind boggling but much has been learned in the aftermath.

There is no one quick fix. As always, early detection is key and the sensible course of action is to make balanced use of an entire tool kit of control options. Recommended integrated pest management includes destroying infested plants, encouraging beneficial insects, removing host plants over winter and checking new plants before bringing them into your garden (more at biosecurity.govt.nz).  Pesticide sprays are also effective, but it is important to choose a product that minimises the impact on beneficial insects.

The scientists at Plant and Food Research (plantandfood.co.nz) have identified some important natural predators of TPP. While photographing psyllids on my tomatoes last summer, I spotted lots of tiny black hover flies perching on the fruit.

A Google search confirmed my hope that Melanostoma fasciatum (the small hover fly) is indeed one of New Zealand’s resident enemies of the psyllid. Unfortunately, our own heroic hover flies and their friends don’t appear to be able to do the job all by themselves. But there is exciting news: in June last year an important predator was a proved for release in NZ. Tamarixia trioaze, a tiny parasitic wasp from USA and Mexico, lays its eggs in the psyllid. Its larvae then hatch and eat the psyllid.

Meanwhile, I am having a break from growing tomatoes or any of its relatives in my garden, hoping to break the cycle at least partially, but I am really missing them so next year I’ll try again.

I plan to invest in some fine horticultural mesh to block adults from laying eggs (easiest on dwarf varieties). And I will keep vigilant watch. If necessary I will spray cautiously with Yates Mavrik® early in the season as soon as I see the first sign of a Psyllid. Mavrik® is registered for use on tomatoes. It is safe for bees and has been shown to be ‘quite safe’ on beneficial insects like hover flies. Neem oil products and insecticidal soaps have also been found to have a good level of effectiveness against TPP.

A few years ago, the tomato plants I grew from seed seemed a lot less affected by pysllid than the plants I purchased. This could have been because my seedlings (an organic mix) were of a more vigorous variety. Reading the experiences of other gardeners some tomato varieties are clearly more psyllid tolerant than others. Earlier planting under frost protection may also help.

We’ve learned a lot about TPP in the last decade and the good work continues both in gardens and in the science labs. 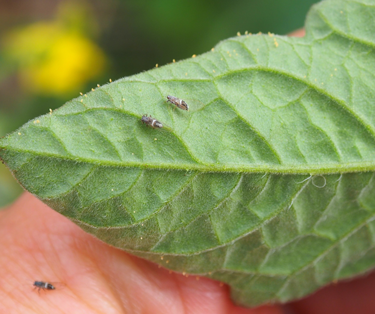 Adults with eggs laid around the leaf edge 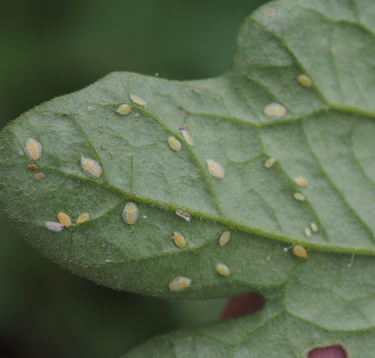 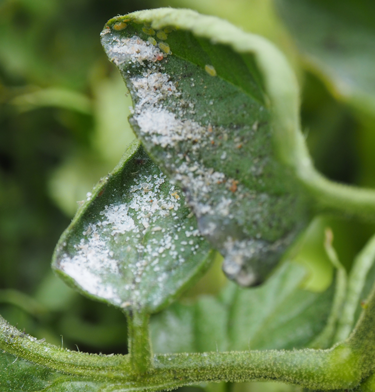 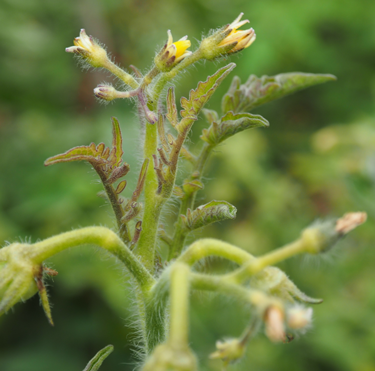