A tale of two city gardens

The much-loved ‘Kiwi quarter acre’ dream is rapidly becoming a distant memory. While the average house size has grown from 120m2 to 200m2 over the last few decades, the average size of our sections has shrunk from 693m2 to 518m2 (homes.co.nz data).

Size doesn’t necessarily matter when it comes to gardens. Small outdoor spaces can be dramatic, beautiful and interesting.  One of the easiest ways to get ideas for your own garden is to visit other gardens. The Auckland Garden DesignFest, which is being held on the weekend of November 25-26, is the perfect opportunity for homeowners to visit 20 beautiful and inspirational private gardens across the city and meet their owners.

Two leading New Zealand landscape designers, Tony Murrell and Trish Bartleet have been involved with the Design Fest in previous years. They take us through two urban gardens they have designed that may be small on space, but deliver big on wow factor.

Tony recently overhauled a Remuera garden, which was not only tight on room, but featured a huge swimming pool in the middle of the garden, obscuring the entrance and dominating the space.

“It was a typical inner-city plot, small but it faced north, which was wonderful. The owners didn’t use the pool and knew they wanted to do something with the space, but weren’t sure what. When I saw it, my immediate thoughts were that the pool had to go and we could create three unique garden rooms in its place. Through our conversations I discovered they liked the idea of having a rose garden, a perennial garden and a woodland garden – all those things in Auckland’s wet climate!” he says.

Tony started from scratch, although there were some key elements already present in the garden that needed to be worked around. “There were beautiful established trees and the house was charming with lovely architectural features, which spoke to how the garden should be, with its classic, clean lines. There were also numerous challenges with the garden as it was. Some beds were heavily root impacted from large trees and the light was better in summer than in winter. Access was compromised access and owners wanted a low maintenance space. From a design perspective, I had to take all these into account when creating the garden.”

Tony’s first job was to get rid of the pool and then work on how the garden rooms could interconnect with each other in the resultant space.

“I deconstructed part of the garden and created opportunities for new plantings within existing planting schemes. Old timber structures were renovated and a paving element was introduced. I convinced the owners to put in a tiny artificial lawn. I love turf, but it would never have established under the large oak tree.”

The garden’s colour palette was arrived at through conversations with the owners, finding out they loved roses and in particular, the yellow David Austin climbing rose ‘Graham Thomas’.

“Most people steer clear of yellow, but keeping the rose was non-negotiable, so we used it as a starting point for a theme – shades of lime green, dark green, white and blue can quite happily meet ‘Graham’ in the garden.”

For the planting scheme, Tony relied on “all designers’ favourites”.  “In shady parts I’ve planted daphne and helebores and in the rose garden there’s a collection of David Austin and hybrid tea roses. I also used Teucrium fruticans, which is great for formal or informal hedging. In the hot, dry part of the garden I used bearded irises and lavender.  All the classics.”

Tony says it’s important that a garden is a reflection of the people who own it and not of the designer. “The owners of this garden had a favourite Karl Maughan painting of Rhododendrons and while I couldn’t plant Rhododendrons in the garden, I could paint the garden in the same colours – painting using plants.”

Across town in Freeman’s Bay, Trish Bartleet has designed a garden that visually packs a punch. Trish says the original garden was traditional, with a lawn front and back and a children’s play area. “But there was no order or cohesiveness. It was a nice family garden without any impact or wow factor.”

Trish took on the redesign of the garden for the home’s owner, Sally Gordon, who is also a landscape designer. The question of why a designer would need to employ a garden designer has been asked more than once, as Trish explains.

“Often garden designers want a critical analysis of our own gardens. Like anyone, we can become locked into a particular design direction and we don’t see alternatives very easily.  Sally couldn’t see the wood for the trees so I came on board to take a fresh look at the garden and see where we could take it.”

Trish’s brief was to create a point of difference from other gardens and for it to have a unique feel. “Sally and I travelled together to the US and had seen some incredible gardens. One in particular, Lotusland in California, had some exciting plant combinations and aesthetics I decided to reference in the garden. It was fantastic to have Sally as a client – she was open to experimenting with unusual and outrageous planting.”

First to go at Sally’s place was the large front lawn, with Trish removing it completely.  The space was then divided into four areas, with two becoming vegetable gardens and the others planted in huge drifts of Beaucarnea recurvata, commonly known as Ponytail Palms, and surrounded by mass planting of unusual blue succulent Senecio serpens, another discovery Trish made at Lotusland. Nikau palms, aloes and agaves also feature heavily in the planting scheme.

“The front part of the garden is the most outrageous,” she says.  “It is unusual to have vegetables planted in a front garden but the east/nor-east orientation is better than the west facing garden at the back of the house, which gets too hot in the afternoons.  The planting scheme is whimsical and takes you out of the realm of normal life. As a front entry it makes you smile and you wonder what is going on as you walk up the steps toward the house. It certainly makes a statement.”

Organised by the Garden Design Society of New Zealand and Rotary Newmarket, the DesignFest raises funds for Ronald McDonald House, Garden to Table and the Rotary Club of Newmarket Charitable Trust. Optional guided bus tours are also available. Throughout the two days, each of the designers will be on-site, allowing visitors a unique opportunity to gain inspiration and learn more about the creative process behind each garden. 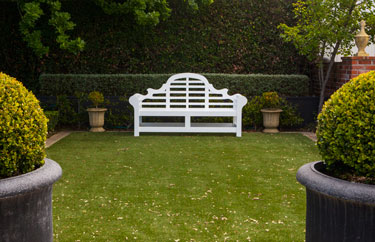 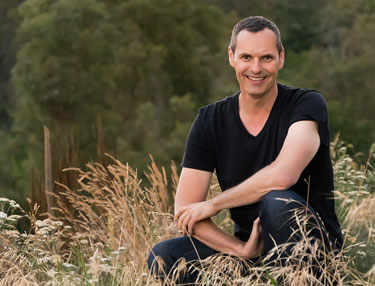 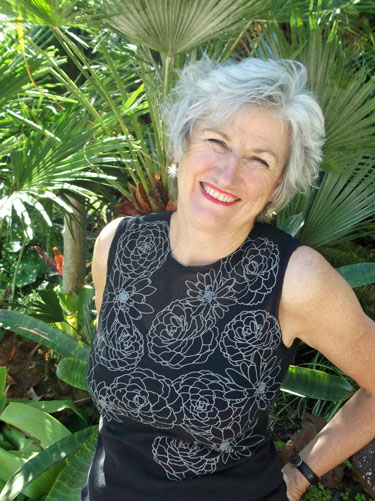 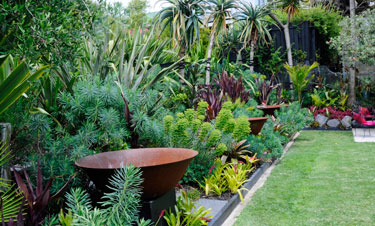