Azaleas and Rhododendrons are versatile evergreen shrubs, popular for their vivid displays of flowers from late winter to early summer. Besides the dazzling displays of flower, it is the variety of foliage and growth forms that make them such valuable landscaping plants.

Rhododendrons are evergreen and flower from late winter to early summer. There are large and small flowered varieties. They grow from a height of 50cm to 4 metres. Modern varieties tend to reach only 2 metres.

Azalea indica is the best-known evergreen azalea. Flowers from late winter to early summer, in coastal regions to cooler highlands. They have large flowers, small leaves and grow from 60cm to 1.2 metres in height.

Kurume azaleas are evergreen with small leaves and small single or semi double flowers which smother the plant in spring. Kurume azaleas tolerate cooler temperatures and require less shade than indica varieties. Grow from 60cm to 1 metre in height.

Mollis azaleas are deciduous, losing their leaves in winter. Flowers appear before the foliage in spring. Some varieties are fragrant. Foliage is highly coloured in autumn. They prefer a cooler climate and will grow in full sun to a height of 1.5 metres.

The best time to plant azaleas and rhododendrons is from winter to early spring, before flowering. However, they can be planted at any time if they are well watered through the summer months.

Where & how to plant

Azaleas look great in mass plantings, mixed borders with other plants, in front of a background of evergreen shrubs or under deciduous trees. Rhododendrons are at their best planted in mixed borders, blending in well with many other plants. Large specimens can create a backdrop to mixed plantings of smaller rhododendrons and azaleas.

Most rhododendrons are forest plants, growing beneath broadleaf or needle type evergreen trees. They need well aerated and highly organic soil. It should be cool moist and acidic (ph 4.5-6.0). Rhododendrons also need shelter from wind and excessive sun and a cool humid atmosphere. As a rule, the smaller leafed types can take more exposure because their small leaves have less surface area to dehydrate.

Rhododendrons have shallow, fibrous and fine textured roots so they are unable to penetrate the dense soils of many gardens. Plant in a moist well drained soil that has plenty of good lime-free compost and organic material dug in before planting. Create raised beds in clay soil to improve drainage.

A newly planted rhododendron needs to be firmly anchored into the soil. After you place the root ball in its planting hole, fill in around the root ball with prepared soil. Lightly compact it with your hands. Thoroughly water the soil to establish good contact between the root ball and the soil. Never use your foot on the root ball – the less the soil is compacted the better the aeration and drainage will be.

Rhododendrons are not heavy feeders. If they are growing well, a light application of fertiliser in spring after flowering is the most they will need. Rhododendrons and Azaleas do not like lime so use a proprietary acid fertiliser. The have very shallow surface roots which can burn easily so fertiliser should be applied sparingly in late winter and again in mid-summer.

Water regularly during summer, giving a deep soak rather than light sprinklings which only encourages the roots near the surface where they will dry out. Complement the watering with a deep layer of mulch (compost, leaf mould, bark fines) applied mid-winter and again mid-summer to keep the roots cool and damp.

Removing spent flower heads will encourage plenty of blooms the next season.

Azaleas can benefit from a trim after flowering to keep them bushy and promote fresh growth. Kurume azaleas make good low hedge and topiary features with light pruning.

Thrips are the main pests of rhododendrons and azaleas. They are very small black insects that feed on the undersides of the leaves causing them to go silver. Shrubs that have been hard hit by thrips should be cut back to promote fresh new growth. Spray with Mavrik or Confidor early in summer to prevent their appearance – these sprays will also control other pests like aphids, caterpillars and mites.
Powdery Mildew makes the leaves generally appear smaller, off-colour and the underside of the leaves are covered in a powdery like substance.  Try to improve air circulation around the plant. Spray with Yates Fungus Fighter.

The best time to purchase new azaleas and rhododendrons is late winter, early spring, when you’ll find the best selection available in the garden centres. 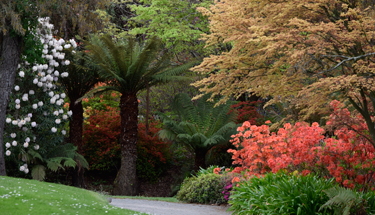 Rhododendrons and azaleas intermingled with mature native and exotic trees and shrubs. 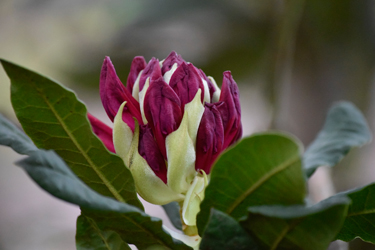 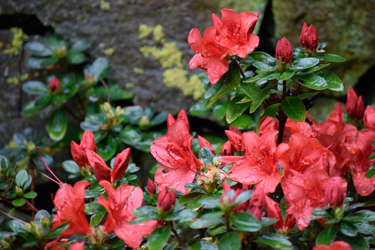 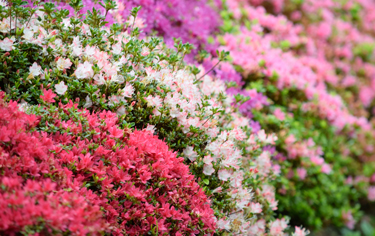 A border of Kurume azaleas 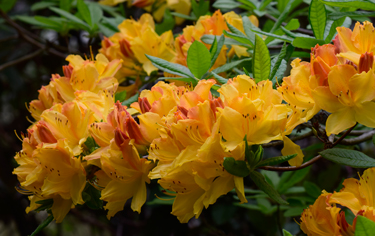 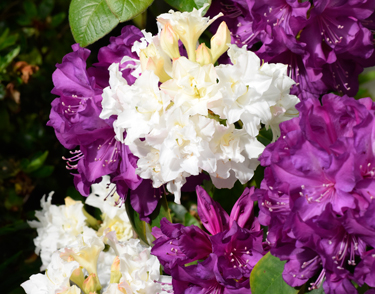 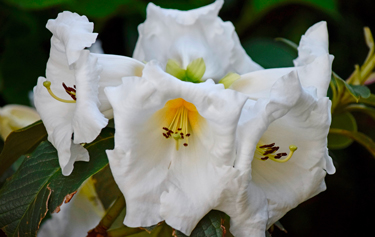