Gardeners are increasingly looking for ways to grow healthy productive gardens while taking care of nature. Sue Linn gets up close and personal with bugs.

I never needed an excuse to grow flowers, but a couple of summers ago I decided to devote a large section of my vege garden to bees and other beneficial insects. Aiming for flowers from early spring though till late autumn, I planted a mixture of easy care perennials and annuals suitable for dry climates.

The perennials included helenium, echinacea, globe thistle, Russian sage, catmint and salvias. Bordering the path, I planted different varieties of thyme. For extra blue accents I planted annual Echium, blue tansy (Phacelia), cornflowers and borage. I also grew yellow foxgloves, scented sweet peas, and towering sunflowers. Annuals make great gap fillers while allowing experimentation with something new each year. In the first year of my bee garden I tried zinnias in bright in-your-face colours, which turned out to be great for picking and kept flowering well into May. In the second year I went for a softer colour option with dwarf yellow cosmos.

Success is hard to measure but the bees seemed delighted. Butterflies were plentiful too. I had no problems with pollination and will happily credit my bee garden for the bumper crops of pumpkins and cucumbers. And also for a discernible reduction in aphids and whitefly, especially in the second summer after planting. Either way, I enjoyed the flowers and all the life they attracted and it felt good to think that my efforts were going some way to protect biodiversity. At least in my small corner of the world.

As a gardener who’s far too lazy to pollinate her pumpkins by hand, I am very grateful for nature’s helpers. While foraging for food bees, butterflies and other invertebrates do the important job of transporting pollen grains as they move from flower to flower.

For pure pleasure it makes sense to plan a garden that always has something in bloom, but in doing so we also provide a revolving food supply for all manner of pollinators. Bees enjoy the nectar and pollen from a wide range of flowers but they’re particularly partial to blue and purple, yellow and white. Many flowers have patterns and markings that are signposts for bees. Generally, the simple old fashioned flowers have the most accessible and plentiful pollen for bees.

Being bee friendly gives me a perfect excuse to be untidy. Vege plants that turn to flower and ornamentals that are overdue for dead-heading provide food and hiding places for beneficial insects. Nature loves a messy garden.

The benefits of planting to support nature go beyond the backyard. Without insects for pollination we’d be missing a huge chunk of the world’s food supply, not only for humans but all the other animals that depend on fruit and seeds in their diet. Pollinators are in decline and concerned gardeners worldwide are making concerted efforts to help them.

Keeping a close watch on the pest bugs in my garden, I’m also aware of the ones who prey on them. It’s exciting to spot a lacewing or a hover fly - or what I hope is a parasitoid wasp. Or to zoom in on what I now know to be the prehistoric looking larva of a ladybird. These voracious predators of common garden pests deserve to be encouraged!

In New Zealand we have thousands of species of tiny parasitic wasps. Smaller than ants, these guys don’t sting. Instead they lay eggs inside other insects, more specifically their eggs, larvae or pupae. When the wasp larvae hatch from their egg they consume their prey, pupate and emerge as new adult wasps. There are parasitic wasps known to prey on aphids, caterpillars, whiteflies, codling moth larvae. Name the pest and there is likely a parasitic wasp that preys on it! New species of parasitic wasp are constantly being discovered. Usually each parasitic wasp species attacks just one kind of pest. They occur naturally in our environment but many have also been brought into New Zealand as biological control agents for crops. Find out more about this on www.bioforce.co.nz.

My favourite parasitic wasp discovery involved a strange looking structure I found on a leaf of my bay tree. I placed it in a closed container while I tried to work out what it was. The next day the lid of my container was covered in black dots. The dots turned out to be hundreds of tiny adult wasps (easy to see under a low power microscope) which had hatched from pupae inside the corpse of a green looper caterpillar. Gruesome but true. But how did one tiny wasp lay that many eggs? It turns out that this parasitic wasp can do a thing called polyembryony whereby a single egg can divide itself into multiple embryos, which in this case amounts to 1000-2000 future wasps. After hatching the larvae wait until the caterpillar is fully grown before they consume it. The caterpillar eventually dies as it spins its cocoon - making a cosy habitat for the wasp larvae to pupate.

Parasitic wasps and bees are close cousins. Like bees, the adult wasps seek food from flowers and are pollinators. By planting bee friendly flowers we are also likely to attract these barely visible garden heroes. Parasitic wasps are said to be partial to yellow marigolds, also lavender and the herbs fennel, rosemary and dill.

Scarily, it seems that the world is only just waking up to the massive contribution predatory insects make towards keeping pest insects in check. We are all too aware about the human health risks of pesticide use. Beneficial insects are also at risk. Products (both natural and synthetic) that kill bad bugs also kill good bugs. Integrated pest management involves careful monitoring and mindful use of prevention and control options to minimise the pressure we put on nature when growing our food.

Some bugs are so small that we can only see them with the most powerful microscopes. They’re called microorganisms and they include the fungi and bacteria that live in our soil. Up to a billion of them live in just one teaspoon of healthy soil, scientists say. New species of microorganism are being discovered all the time. So much is yet to be discovered about these microorganisms and their ecosystems. What is known for sure is that they perform some very useful functions in the soil. For example, microorganisms are actively involved in supplying nutrients to plants. They also play an important role in disease prevention.

When we add compost or organic manure to our gardens we’re adding future humus, the black stuff that is organic matter broken down completely to its most stable form. Humus holds the soil particles together to form its all important structure and humus is where microorganisms live. So when we add organic matter to our soil we are supporting soil life and biodiversity. It’s amazing to think how many good bugs there might be in each barrow load of compost! 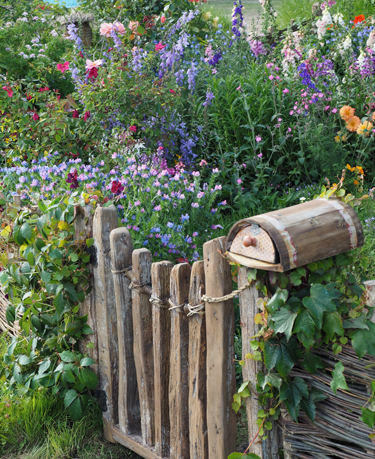