Generous, cheerful resilient marigolds are hardy characters who get going when the going gets tough. That evocative scent like it or love it is also part of their charm as these are some of the best flowers for repelling insect pests, including mosquitos. Their orange and yellow tones look wonderful amid the lush greens of a summer salad garden. While other flowers struggle in the heat, marigolds box on, as fresh and youthful as spring.

Try yellow marigolds with cosmos, zinnias, Mexican sunflowers, geraniums or verbenas. And of course marigolds look fabulous with their fellow companion flowers such as borage, chives, and common sage.
Marigolds last well in a vase. In India, where the yellow colour represents happiness and life, marigolds are favourite wedding flowers.

African marigold, Tagetes erecta, is a tall (45cm) plant with large flowers in colours ranging from lemon to dark orange.

Less well-known Tagetes species include Tagetes tenuifolia, the signet marigold, with delicate lacy, lemon scented foliage and Tagetes lemmoni a sprawling shrub up to 2m tall with lacy foliage.  Perennial herb, Tagetes lucida (also known as Mexican mint and Texas tarragon) has a mild sweet liquorice taste said to be a good substitute for French tarragon. Tea made from this species is a popular drink in Latin America and has been used for centuries as a stimulant, digestive aid and hang-over remedy.

Marigolds are among the most widely planted companion plants for the vegetable garden. In particular marigolds are said to be excellent guardians of tomatoes, lettuces, peppers, cucurbits, carrots and brassicas. By fending off the attackers or masking the more delicate smell of target plants, the distinctive marigold aroma is known to deter insect pests, especially white flies. Meanwhile the roots exude protective chemicals (allelochemicals) that can repel, and in some instances kill harmful soil nematodes.

A mass planting of African and French marigolds 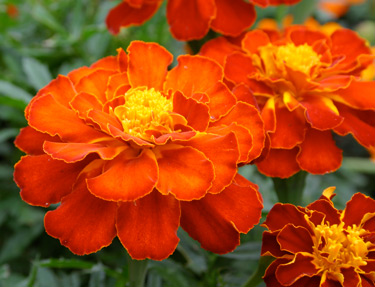 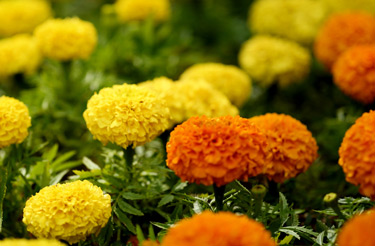 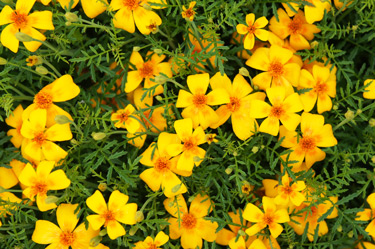