Nature's way to a better world

Keeping organic waste out of landfills is one of the best things we can do for the environment. And once you get the basics of how composting works, turning kitchen waste into healthy soil is one the most fascinating and engaging aspects of gardening.

The trick is to devise a system that works for your household, minimising the time and energy. The range of options includes hot composting, cold composting, fermentation (Bokashi) and worm farming. Many gardeners combine more than one system.

Hot composting requires the building, all in one go, of large heap (at least a square metre) using a balance of ‘green' (high in nitrogen) and ‘brown’ (high in carbon) ingredients. This results in microbial activity that releases heat. When the middle of the heap reaches peak heat it is turned to ‘stoke the fire’ with oxygen and feed the microbes. It takes work but the results are fast and effective.

Cold composting also uses a balance of ‘green’ and ‘brown’ ingredients but the heap is built up more gradually as kitchen waste is added. Turning is optional. This is a more convenient system requiring less work, but it takes longer. The smaller the pieces of raw material, the greater the surface area for microbes have to work on, so the faster the raw material will be converted into compost.

‘Bokashi’ fermentation composting relies on a special kind of anaerobic bacteria, which are added to the mix. This is composting without air in a closed bucket with a lid. The raw material doesn’t change much in appearance, but is effectively ‘pickled’. However when buried in the garden or compost heap it will decompose very quickly. An advantage of the Bokashi system is that all food scraps can be managed, even meat, and it can be kept indoors. If there is no backyard for burying, the finished product can be dropped off at a community garden or other grateful recipient.

Worm farming is fun, and a tidy way to get rid of kitchen scraps. A simple worm bin doesn’t need much space and can be set up in the garage. Once you build up an active breeding population of worms it can be a surprisingly effective recycling machine with the bonus of ‘worm wee’ fertiliser on tap. There is a limit to the amount of waste the average worm farm can handle so you may need more than one, unless you also have a compost heap. It is important not to overload the worms with more than they can eat. To speed things up it makes a big difference if you chop your worms’ food up into smaller particles. Worms are fussier eaters than compost microbes. For example, they don’t like citrus or onion, but they do love coffee grounds and will thank you for pumpkin or avocado with a spate of rapid baby making.

Compost works best when it’s warm so a position in sun is useful. In larger gardens a two, three or even four bay system provides an organised space for storing raw materials and turning the heap. Ideally, each bay should hold a cubic meter. Plastic compost bins with lids are a convenient ready-to-go alternative to building your own, offering a tidy option for compact gardens while big enough for successful cold composting. Some have a turning system for easy aeration. Once a bin is full, new materials can’t be added until after the composting process is complete (about 6 months), so a twin pair of bins makes sense.

A successful compost pile needs both ‘green’ (mainly nitrogen) and brown’ (mainly carbon) matter built up in layers. Start with a brown layer then cover every new layer of green material with another layer of brown. This helps prevent smells and flies. Accessible sources of brown material include shredded cardboard and newspaper. During autumn and winter, get the kids to help gather and stockpile fallen leaves. These are among the richest, most valuable of compost ingredients, and arguably all you need. A sack of untreated sawdust or a bale of straw kept next to the compost heap are other convenient sources of brown material.

The most common cause of a smelly compost heap is anaerobic decomposition due to lack of air or an excess of green material. If the heap gets smelly, add more brown material. Cover the compost heap to keep it moist but not soaking wet.

Meat scraps are best left out of a home compost heap, but even in the absence of meat, rats and mice love a good compost heap. They’re particularly partial to pumpkin seeds. Some gardeners employ wire mesh linings to help keep rodents out of compost bins. A concrete base is not recommended as this also blocks the soil microorganisms from getting in and doing their good work. Rodents are said not like the pickled Bokashi compost and are repelled by coffee grounds.

Compost microbes need carbon for energy and nitrogen for protein. Science tells us that the optimum C:N ratio is 25 to 30 parts carbon to 1 part nitrogen. However, because every raw ingredient actually contains both C and N, the recipe by volume works out to be somewhere around half and half, (or 2/3 of one to 1/3 the other) depending on the specific materials used. Layering and experimentation are key. Too much green and the pile will get smelly and slushy. Too much brown and the composting progress will slow right down. 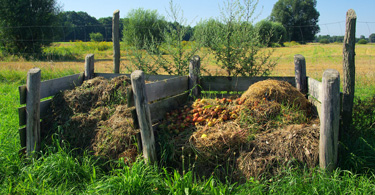