Twenty-two years ago, when Steve went shopping for a new home for himself and his young son, he found his ideal spot at Bell Block, just north of New Plymouth. The secluded 1.7ha block with its flat paddocks, great soil and reliable water supply was exactly what he needed for his animals, food gardens and sheds. And the unique setting had him hooked.

“What appealed to me most was how the house was nestled in native bush,” says Steve. The little piece of classic Taranaki lowland forest is home to many native birds and features towering pukatea, tawa, kahikatea and puriri.

“The other thing that appealed was that the place needed a good tidy up. So there was always something to work on,” he adds. Never one to shy away from a solid project, he got busy clearing the excess vegetation that was swamping the house. The resulting oasis is a lush green lawn surrounded by the lofty native trees and wide spreading black mamaku (tree ferns).

Behind the lawn area, Steve’s well-maintained track leads into the bush, with a rope so you can’t get lost. In here, immersed in nature, it feels like you could be miles from anywhere. He estimates the oldest canopy trees are at least 80 years old. The diverse understory is rich with kawakawa, divaricating shrubs and ground ferns, not a weed in sight. Moss, lichen and epiphytic plants growing high in the trees are signs of a very healthy patch of paradise.

Over the years he has shot nearly two hundred possums, (he’s kept a tally on the shed wall), planted lots of shelter, more natives and many fruit and nut trees. He has built extensive fencing for stock and sheds for his car projects. There is no talk of ever moving. Relishing his recent retirement, Steve is never bored.

When soulmate Jo came along nine years ago, another layer of planting began emerging along the bush line. Jo’s planting style reflects her love of tropical gardens, and she has been delighted to find that the sheltered frost-free location beneath the trees is just right for her favourite plants.

“I love the large native trees. They work so well with tropical plants which grow well in part shade,” says Jo.  “I spend many happy hours gardening on weekends and summer evenings. “She also spends quite a lot at Big Jim’s,” quips Steve. Jo agrees, their local garden centre is a favourite destination.

For colour and drama throughout the year Jo has planted cannas, cordyline, and lots of bromeliads. The exotic flowers of Datura, Impatiens, Luculia, and vireya rhododendrons bloom brightly in early winter. Thriving in sunny spots, proteas and kangaroo paw (Anigozanthus) are among Jo’s favourites for picking. She also loves her late summer flowering ‘Limelight’ hydrangeas and her expanding collection of colourful dahlias.

Topsoil has been added to enable planting around mature trees, followed by lots of thick layers of mulch. Jo has also discovered that the nooks and crannies of old tree stumps and buttressed pukatea roots provide perfect habitats for bromeliads and succulents.

Her favourite gardening gadget is her stainless steel multitool with a serrated edge and a v-shaped head. “It is ideal for getting through tough ground,” she says.

She owns up to a habit of misplacing garden tools. “We have had one or two challenges with spades,” reveals Steve. “One was inadvertently thrown out with the green waste, only to be discovered in the embers of the fire.” That one was rescued and painted bright red but Jo now has her own spade and is banned from using Steve’s.

As a bloke who enjoys a good tidy up, Steve is partial to a good pruning lopper and pole saw. He’s also very fond of his leaf rake, pointing out that leaves make the very best compost. There are numerous compost bins around the garden, built from recycled pallets.

Of all the interests Steve and Jo have in common, the big one is their shared love of growing their own food. Each has their own separate vegetable garden and there is a sense of healthy competition between the two. They joke that they might start having harvest weigh-offs to see who can grow the most.

The couple rarely buy fruit or vegetables. Any surpluses are preserved, frozen or shared among family and friends. Pumpkin and root crops harvested at the end of each summer are carefully stored to keep them in healthy carbs throughout the year.

Brassicas, potatoes and kumara are Steve’s favourite crops to grow in his large traditional vege patch. Jo’s vege garden is like a secret garden entered through a door between two sheds. In waist-high beds she grows loads of leafy greens, tomatoes and capsicums. This has been a great season for her tomatoes and peppers, still productive in early winter. Despite using nets to keep bugs at bay, whitefly have been the main issue lately.

“I had a big infestation of white fly for two years running. I finally managed to get it under control by being persistent with neem oil and I haven’t had them back this year. I also planted marigolds as a repellent.”

Steve says his dream garden would be one with no pests. “My biggest challenge has been stopping the birds eating all the fruit. All our orchard and vegetable areas are now fenced off from rabbits, birds and Jo’s chooks.” He has also installed windbreak cloth to protect the fruit trees.

When he’s not gardening, Steve is most likely to be found in his large, immaculately decked-out shed. His most recently completed project is a charming she-shed built especially for Jo, with bench tops of solid macrocarpa, up-cycled kitchen cupboards and shelving made from recycled pallets. In here, with light flooding in through recycled windows and French doors, Jo has loads of space to sow her seeds, pot up plants and work on her craft projects. Lately she ’s been teaching herself mosaic art.

On the wall inside Jo’s shed is a framed picture of her father Ted in his vege garden. Like so many keen gardeners, Jo and Steve credit their parents for gifting them the gardening bug. Especially after the recent loss of both their dads, their garden is a strong connection between generations. An enviable variety of hostas in their garden are a reminder of Steve’s father Kelvin who was an avid hosta collector. In the orchard, Tamarillo ‘Ted’s Red’, laden with bright red fruit in May, was given to them by Ted. “He told us it would give us a bumper crop every year and so it does,” says Jo.

Ted grew vegetables as far back as Jo can remember. “He always had a big garden full of all types of vegetables. I remember our whole front lawn being planted out in potatoes one year before he resowed the lawn after they were dug up. Growing up, I helped dad in the garden, and he made a space for me to grow my own veges. In later years he would help me in my vege garden. His knowledge and advice have been invaluable. Mum always had a lovely flower garden. She would offer cuttings from her garden which I would try to grow.”

Steve also remembers watching his father putting in a big potato crop every year and the kids helping to dig them up. “I was about fourteen when I asked Dad if I could use some of the calf paddock to grow vegetables. My parents taught me to appreciate the work one puts in to get a good crop at harvest time. It’s very satisfying to save money on vegetables and to grow enough to give away.”

Look for these products, tips and advice at an Go Gardening garden centre near you. 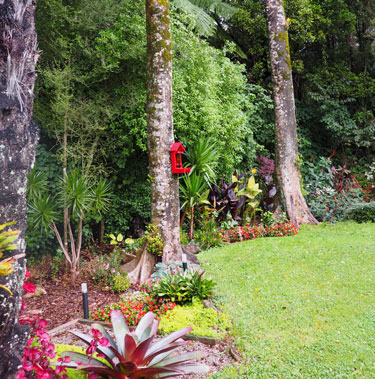 Tropical plants nestle at the base of mature native trees 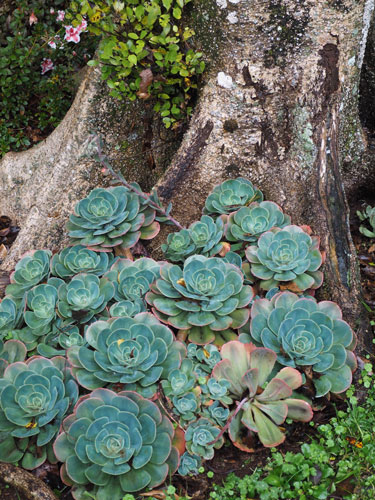 The buttress roots of mature pukatea trees are perfect for succulents 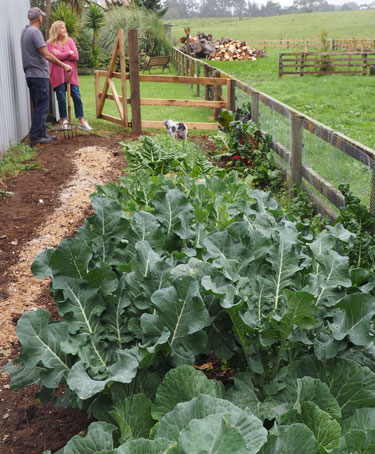 Above and below: Steve's vege patch 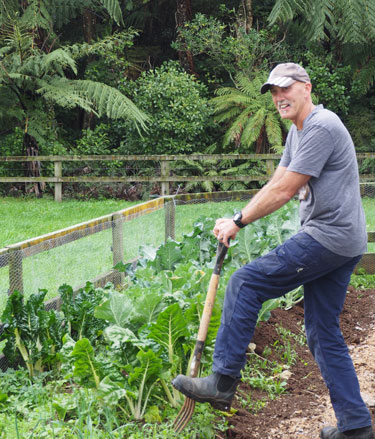 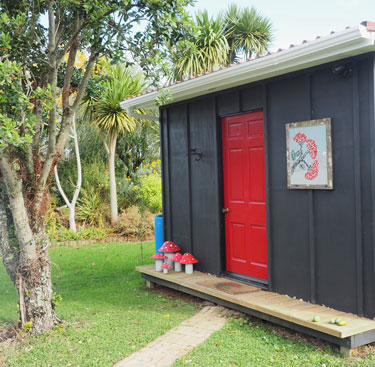 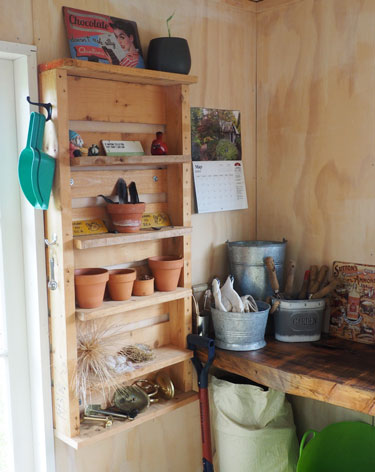 Shelving made from recycled pallets provides plenty of space in Jo's shed.