Like many of her generation, Laura Faire came to gardening via her passion for great food and healthy living. For this professional chef, food writer and television presenter, the garden and kitchen are as one.

Laura’s recipes are innovative and delicious, and she writes in a way that makes you want to try every single one of them. But what sets this foodie apart, is that she speaks the language of a true gardener.

Whenever she and her husband, Jonathon move house (they do this quite often), their raised vege beds are among the first things to be up and running. ”Before we even moved last time I had plants growing in pots already to go in”, she says. She juggles her gardening around limited time and limited space, but growing her own food is a priority.

I visited Laura and her vege plot in July, amidst renovations and a hive of activity indoors as a team of colleagues prepared for a photo shoot for Real (the New World supermarket magazine that features her recipes). Nothing unusual in the life of a Laura who also writes a weekly column for the Sunday Star Times, appears on TVNZ's ‘Good Morning’ and last year released her first recipe book, ‘Now is the Season’, published by New Holland.  Not to mention that she is also eight months pregnant with her first child. Laura seemed remarkably unstressed.

She enjoys her busy city life, for six years in London and now back in Auckland, but her childhood was spent in very different surroundings. Laura was raised on what she remembers as an idyllic Northland farm, the youngest of four children, with the family self-sufficent in meat and vegetables for a number of years. “I clearly remember husking corn, podding peas, and pig-slaying day! I have golden memories of growing up in the Bay of Islands and my mother’s huge vegetable garden.” Laura’s mother, also a food writer, is a very keen gardener and still runs a lifestyle block with a large vegetable garden and glasshouse. Her fresh produce often features in Laura’s creations.

What is your biggest disaster?
“There are always disasters in my garden. One recent disaster was having spent a lot of time on preparing and planting my sweet corn bed – and writing about it - a big fig tree filled out so much that it shaded the corn and it was a spindly hopeless crop. I always look up before I plant anything in winter now!”

What is your proudest gardening moment?
“My first straight carrot!  I think I’ve overdone the compost in the past.”

What would be your most indispensible plant?
“Rhubarb, because you always have something for a pudding.”

What are you planting in September?
Strawberries, beetroot, sorrel, rocket, and some more aromatic herbs. Also, Jersey Benne potatoes because my husband will probably insist.

What is your best advice for new gardeners?
“Get on with it anyway! It doesn’t matter if you don’t know anything – just have a go.”

Despite her fond childhood memories and love of gardening, Laura says “I’m too pragmatic to want that life for myself.” She does seem, however, to squeeze a lot of it into her suburban plots, including keeping chickens. “Even when living in London I would thrash out a bit of dirt down the side of the flat. Sometimes it was completely unsuccessful,” Laura laughs. “You could always tell the Kiwis – they were always the ones growing herbs and lettuces in pots.” It was during her time in the UK that she trained as a chef at London’s elite Leith’s School of Food and Wine.

Laura, who does her own food styling for photo shoots, clearly has an eye for aesthetics, but she is unapologetic that her vegetable garden isn’t always photogenic. “It’s always a bit messy. The important thing is that it is productive.”

Usually, she gardens for an hour or two each weekend and “about once a month I spend a whole day out there.” Right now however, her husband is doing most of the physical work and “I’m bossing him around.” The garden beds are low to the ground with narrow paths, “I didn’t design it for pregnancy!” she laughs.  But it’s always been her vision to combine children with gardening. “I think it’s really important that our kids know where food comes from. My niece only eats vegetables because my mum and myself are gardeners. She went off veges for a while, but get kids to choose their own broccoli from the garden and they’re away!”

Laura’s food philosophy revolves around eating fresh and eating local. “One of my greatest fears is that people will lose the skills to look after themselves. The other is the loss of our topsoil.” She is adamant, “Composting is the easiest most important thing you can do.” In her blogs and columns she promotes all forms of recycling. In her own garden she has worm farms and purpose built compost bins, feeds meat scraps to her chooks and after a weekend fishing trip, the fish carcasses end up in the garden, to be buried under a crop of veges.

Laura and Jonathon have moved four times in the last four years, but the transient lifestyle doesn’t stop them from planting trees. As well as their vegetable garden they’ve planted plums, apples, citrus, and lots of lime trees. “It feels good to leave a property and know you have left fruit trees for the next owners.”

This recipe may seem unusual, but grilling spring onions brings out their natural sweetness.

Combine the olive oil, vino cotto and salt as a dressing, and toss the spring onions in the dressing.
Leave to marinate for at least 1 hour or overnight.
Heat a chargrill pan or barbecue until smoking hot.
Chargrill the spring onions until limp and partly blackened. Take care to turn them regularly.
Serve with the grated cheese and capers.

Find more of Laura at: www.laurafaire.co.nz
Credit: Extracted with permission from "Now is the Season" by Laura Faire, with photography by Kieran Scott, published by New Holland, RRP $45.00.

Spring onions (Allium fistulosum) can be grown from transplanted seedlings, which are available in punnets most of the year. Alternatively you can grow them from seed, sown directly into a sunny position with well-drained soil in autumn or spring. They are also easy to grow in containers if you plant in well-drained growing mix, keep them watered and feed them every few weeks with liquid fertiliser. Spring onions are also known as bunching onions. There are various varieties to try, including red-skinned varieties and those with longer white stems (like mini leeks).

Laura’s tip: “Spring onions confuse root crop pests, so they’re a good crop to grow near your carrots, but allow plenty of space between rows, as one crop can shade the other.” 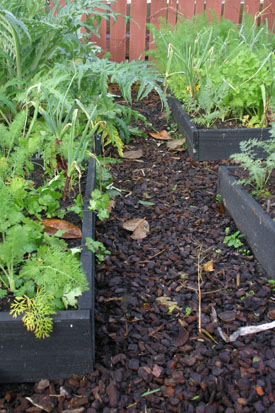 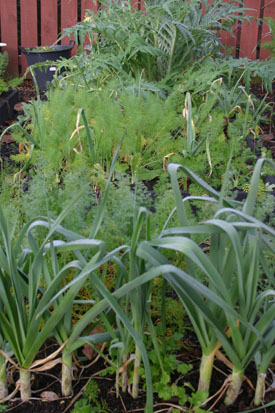 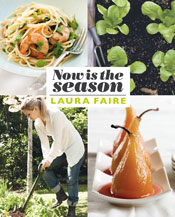 Now is the Season by Laura Faire