High flyers in the dry

With water conservation on our minds in the post-Christmas months, it’s nice to know there are some stunning plants that will stand up to drier, hotter weather conditions and still look sensational.
There’s always a lot to do in the garden over the summer months and watering can be a labour intensive activity. But this is also the best time for alfresco entertaining, relaxing and enjoying your garden.  Perennials are not only a great addition to garden borders; they also flower at a time when you are outside to appreciate them!
Here are three stunning perennial collections that will put on a lovely display, even if they get a little dry between drinks.

Flowers don’t come much tougher than the Red Hot Poker. The trouble is that at full size they are often too large for the average border and can get quickly out of hand.

Not so the new Dwarf Kniphofias, ‘Ember Glow’, ‘Fire Glow’ and ‘Pineapple Popsicle’. These diminutive hotties flower profusely on spikes just 50-65cm tall, and repeatedly bloom from spring right through to autumn.

Native to Africa, Kniphofias, also known as Red Hot Pokers or Torch Lilies, are drought tolerant, thrive even in relatively poor soils, and produce good amounts of nectar attracting birds when in flower. A well-drained, sunny position is the preferred habitat for these hardy beauties.

Dwarf Kniphofias are compact and just like their larger relatives, form clumps so they can be divided when fully established. Removing spent flower stems to ground level can improve plant appearance. These new varieties continue to send up further flower spikes over a far longer period than is usual for kniphofias.

Dwarf varieties ‘Fire Glow’ ‘Ember Glow’ and ‘Pineapple Popsicle’ are the first in a series of new release Kniphofias from the Living Fashion range.

Also known as the ‘Carpet Flower’, the Gaillardia is a native of North and South America, and is related to the Sunflower family (Asteraceae). Renowned for their intricate patterns in rich reds and golds, these plants are also known as ‘Blanket Flowers’ after the brightly coloured blankets made by the indigenous people of the region.

Gaillardias are tolerant of poor soils and dry or even coastal soil conditions, and are relatively fast to establish. Two new Gaillardias have been released this season, Gaillardia ‘Red Sun’ and Gaillardia ‘Sun Flare’.

Gaillardia ‘Red Sun’ is a striking new hybrid with hot orange-red sun-like flowers massed over a compact foliage mound of green leaves. Gaillardia ‘Sun Flare’ features gold fluted flowers with a central red ‘eye’ massed over a compact foliage mound of silvered leaves. The seed head of ‘Sun Flare’ is also rather appealing, with a fuzzy appearance.  Both of these varieties flower for up to six months from late spring through autumn, providing eye-catching and extended summer colour.

Sedums, also known by the common name of stonecrops provide fabulous border effects, both with their foliage and their flowers. In spring, the foliage makes a great accent among earlier flowering perennials, and then the sedum flowers take the limelight throughout summer and autumn.

New releases this year to add to your Sedum collection are ‘Chocolate Drop’ for those who love chocolate foliage and ‘Crystal Pink’, which has a delicate, almost ice pink colour, that is very appealing in the garden bed. Their compact habit ensures these Sedums stay in good shape in the border as well as flowering ‘their socks off’.  Recent releases ‘Mr Goodbud’ and ‘Hot Stuff’ also boast tremendous flowering performance.

Like all succulents, sedums store moisture in their leaves as a survival mechanism. Some attention to watering is needed initially but, once established, sedums are extremely happy with minimal watering. 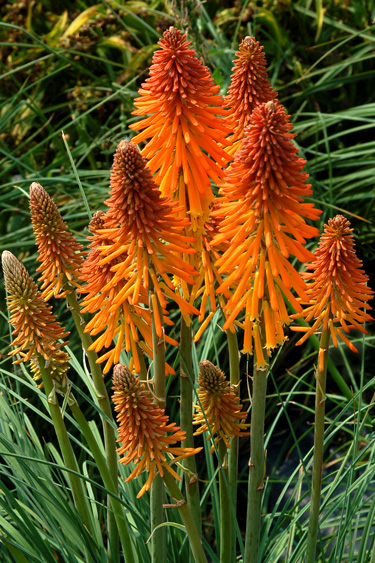 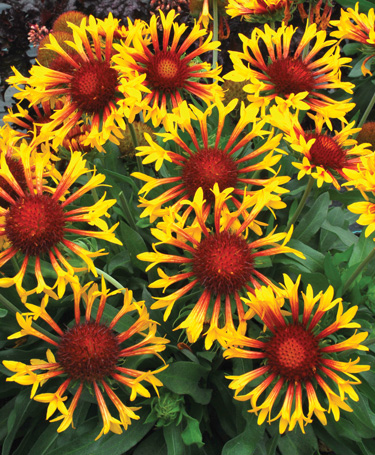 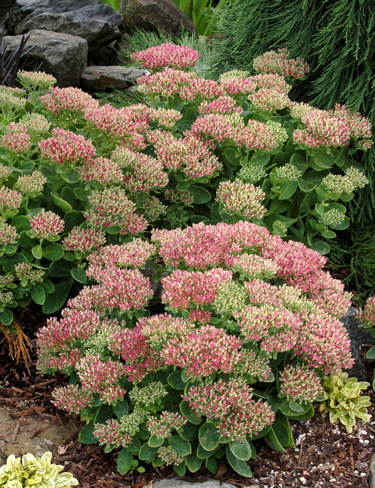