A shipshape little shrub known as Grey Box™ Westringia was crowned Plant of the Year 2015 at the prestigious Nursery & Garden Industry Australia Awards.

The neatly compact shrub has become a top seller around Australia, popular with home gardeners and landscapers alike. Now it’s racing out of New Zealand garden centres too. The distinctive grey foliage offers an interesting colour alternative to dark green hedge plants. Plus it produces a plethora of white flowers over spring and summer.

Grey Box™ Westringia is fantastic for mini hedges, mass planting, or for pots. Without trimming, it will grow to approximately 45-55cm high and wide, but it can be kept at just 30cm when trimmed.

Robert Prince, CEO of Nursery and Garden Industry Australia said, “Judges were extremely impressed with the plant’s environmental qualities”.  One of the qualities that makes Grey Box™ Westringia such a standout is its diverse climatic tolerance.  It will cope with everything form drought to frost, and also humidity.

But it doesn’t stop there. Grey Box™ Westringia has three equally tough cousins. All from the same breeding programme, Aussie Box™’, Naringa™ and Mundi™ extend the choice of landscaping options. Naringa™ is an excellent medium height hedge with lavender-pink flowers and left to grow to its natural shape, it makes a useful screen up to 2m tall. Aussie Box™ has soft mauve flowers and makes a dense 40-60cm tall hedge or leave it untrimmed for a rounded shrub less than a metre tall. Mundi™ is the lowest growing variety, a mounding groundcover form.

Also known as Coastal Rosemary, Westringias are mainstays in dry coastal areas but these exciting new compact forms are proving popular across the board. If you want that strictly formal look they respond beautifully to pruning, but they demand nowhere near as much maintenance as older forms and they still look tidy when left untrimmed. Ideal in full sun or partial shade, they suit most soil types including sandy and heavy clay soils and will also tolerate harsh salt laden winds.

Westringias are fast growing and easy-care, whether you want a formal hedge, sculptured balls or a mass planted sea of silvery green. 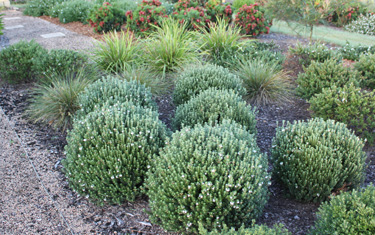 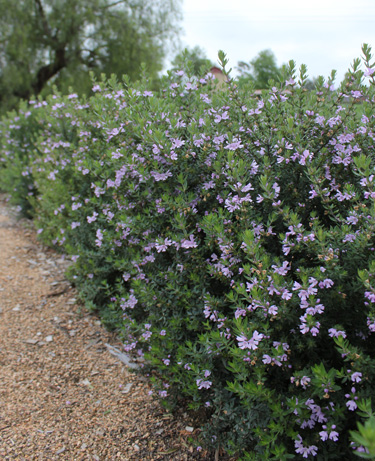 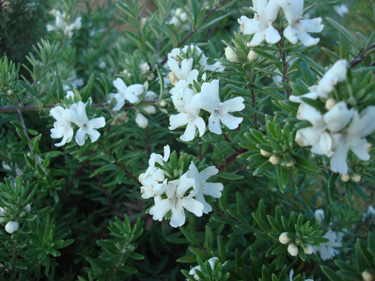