At some point during October or November, and depending where in New Zealand you live, the soil warms to a steady 16 degree minimum. This is the time to plant those warm season crops that will reward us with bountiful harvests over summer and autumn.

Sowing seeds in situ, straight into the garden bed or planting box is the best way to go for the likes of beans, sweetcorn and root vegetables. These vegetables will germinate fast in warm soil and quickly romp into strong active growth when their young roots are left undisturbed

Temperature and timing is important for summer crops. Each seed has its optimum soil temperature at which germination will occur in the shortest number of days.  For example, at 25°C a certain seed may sprout in less than a week, at 15°C you might have to wait two weeks, and at 10°C germination of that same seed may take a month or more, or not at all.

Similarly for seedlings; a young cucumber or zucchini plant in too cold soil will sit and sulk, while the same sized seedling planted into warmer soil a week or two later will soon catch up and overtake it. So there is no point in sowing or planting outdoors too early. However, we can start our seedlings in a greenhouse, in little pots for transplanting later. Or simply let the experts do it for us. Tomatoes, capsicums, cucumbers and zucchini transplant very easily, especially when grown in individual pots. Another option is to sow into little biodegradable pots so the seedlings can be planted out pot and all.

Beans grow best when seed is sown straight into warm garden soil. There are all kinds of interesting beans to grow, both dwarf and climbing forms. Climbing beans take a few months to mature, but they produce about three times the yield per square metre as dwarf beans and will keep on bearing until the first frost. Dwarf beans mature very quickly to produce the bulk of their crop over a two-week period.

For straight glossy beans set high on the plant for easy picking, try ican Dwarf Bean Supreme. The fast maturing high yield is spread over two to three weeks from each sowing.

To achieve a non-stop summer-autumn supply for a family of four sow 15-20 dwarf bean seeds every three weeks from October to January. Pick beans frequently and eat them while they are young and tender.

Like beans, sweet corn establishes strong roots when sown directly into warm garden soil. For best pollination, sow seed in a block rather than a single row. Growing your own from seeds offers a wide choice of varieties. Sweet Corn Tender Sweet was chosen for the ican range for its strong germination, vigorous growth and disease resistance, and is quick maturing, tender and tasty.

Sow carrots, parsnips, beetroot and radishes straight into a sunny patch of loose crumbly soil. Water gently and keep the soil evenly moist as you watch for seeds to germinate. Remove the weakest seedlings to make space for the crop to mature. Eat the thinnings as baby veges or microgreens. Beetroot is ready for harvest within about two months of sowing.  Globe shaped varieties are ready to eat in the shortest time, especially the baby varieties which are lovely for cooking and serving whole.

ican Beetroot Red Lightening is strong growing and early maturing. Young leaves are delicious in salads and can be picked a few weeks after sowing.

TIP: For faster germination, soak beetroot seed in water for an hour before sowing.

For the best carrot, try ican Carrot Europa, which is fast to germinate, strong and vigourous, and rates highly for taste.

To grow beautiful tomatoes you will need a good few months of warm sunny weather. Give them shelter from cold winds, but some air movement is important as still, humid air invites disease. For tall growing varieties, set stakes firmly in place before planting.

Tomatoes also need a well-drained soil that holds a non-stop supply of water and nutrients. Keep them well fed and watered, especially once the fruit appears. Once plants are growing strongly, deep infrequent watering is better than a daily sprinkle. Thoroughly soak the ground to train roots to grow deep into the soil.

The easiest way to be sure of the best balance of nutrients, is to use a fertiliser blended especially for tomatoes. Add lots of compost before planting. To minimise disease problems, plant in soil that has not had tomatoes or any of their relatives (e.g. potatoes or peppers) grown in it for at least two seasons. If that ’s not possible, dig out the soil and replace it with fresh planting mix from the garden centre or soil from elsewhere in the garden. Alternatively plant tomatoes in large containers or bags. Choose varieties with disease resistance in mind. ican Tomato Flavoursome is recommended for its delicious flavour and high yield.

PEST WATCH
Keep close watch for tomato and potato psyllid (TPP). Adults can be hard to see, they look like very tiny locusts about 1mm long. Signs of psyllid attack include a sugary deposit on the leaves, tiny yellow eggs on leaf edges and discoloured purple-yellow top growth, which is caused by a bacterium the insect injects into the plant when feeding. This pest can be controlled with Mavrik. Alternatively, keep plants covered with fine bug net to prevent females laying eggs on your plants.

Peppers are fun to grow with so many different colours, shapes and sizes to choose from. They’re all variations of the Mexican native, Capsicum annuum, which thrives in warm summer conditions. A long warm growing season is needed, at least three months of warm summer temperatures. A cloche can help to give young plants extra warmth. Plant seedlings outdoors as soon as all risk of frost has passed. Don ’t delay planting too long. Fruit may not set if temperatures are too high or the ground is too dry.

Peppers are perfect for growing in containers. Choose a good-sized pot (at least 25cm diameter for one plant) and keep it well-watered. They can be grown in pots to maturity or just until it is safe to plant out in the garden.

As soon as fruit appears, feed with a balanced fertiliser. Harvest at any stage from green to red, depending on the required flavour. Sweet bell peppers (capsicums) mature from a tangy savoury flavour when green, to the sweeter red, orange or yellow. Chillies increase in hotness as they ripen from green to red. Fruit deteriorates if left on the vine once it is fully ripe, but all capsicums are great for pickling and preserving so you could never grow too many!

Aubergines (or ‘eggplants ’ ) thrive in warm weather and grow well in pots. They need four to five months of summer warmth from seed to maturity.   Mulch with straw to conserve moisture and protect fruit from damp soil. When the first flowers drop to reveal the tiny new fruit, apply fertiliser.  Avoid wetting the foliage as this encourages disease problems. Stake as necessary to support the heavy fruit.

Pumpkins, squash, zucchini, cucumbers and melons all belong to the plant family.  Collectively they ’re called ‘cucurbits ’ and they share some key features, such as having separate male and female flowers on the same plant. The male flowers appear first and then the females. It’s exciting to watch the small fruit form below the petals of female flowers once pollination has occurred.

Pumpkins and squash need a good three to four months of warm weather to reach maturity, hence the need to plant as soon as the soil has warmed to 16℃. Seeds can be sown directly into the ground or started off in small pots in a greenhouse. Although some have been bred to be more bush-like, pumpkin and squash are essentially vines, and most need space to ramble. If you don ’t have much ground space you can give them a sturdy support to clamber over on.

Zucchini (or courgettes) are the sprinters among cucurbits, growing quickly and continuously with phenomenal yields. Modern compact varieties are ideal for smaller gardens and can even be grown in large pots. ican Courgette Leader has smooth, shiny dark skin and is an upright grower, which means easy picking.

Sow one or two seeds in October and another one or two in December. Sow seeds directly or purchase single potted seedlings. Work plenty of compost into the soil before planting or sowing. Regular watering and liquid feeding with a high potassium fertiliser will promote vigorous growth and heavy fruiting. Zucchini taste best if picked when young and tender, and frequent picking will keep them cropping for longer.

Plant a cucumber seedling every few weeks for non-stop summer and autumn supply. Where space is limited, cucumbers can be grown in large pots and trained upwards on a teepee, or fence. Like many climbing plants they come with their own inbuilt ‘plant ties ’ called tendrils to help them climb. The trendril is straight at first but once it hits something it starts to curl like a spring, pulling the plant towards its support structure and holding it there.  When picked young, cucumbers are super tender and sweet. A choice of top performing varieties is available in garden centres. Like their cousins zucchini and pumpkins, cucumbers give their best when provided with plenty of moisture, good air movement around their leaves, regular feeding and bees for pollination.

TIP: Beans, cucumbers, zucchini and pumpkins need their flowers to be pollinated before they will produce fruit. Plant flowers that attract bees and other pollinator insects.

Cucurbits are pollinated by bees and some other insects. When foraging for food, bees transfer pollen from the stamens of the male flowers to the sigmas of the female flowers. Pollination can only happen during the middle part of the day when the bees are active and when both male and female flowers are open. The male flowers form first and then the females, further down on the vine, sometimes a week or two later. The female flowers are the ones with a tiny immature fruit below the petals. Each female flower is open for one day only and it takes a lot more than one bee visit to do the job. Flowers that are not sufficiently pollinated will drop from the vine. Oddly shaped or stunted fruit (or no fruit at all) also indicate that pollination is lacking.

Poor pollination can signal a lack of bees. It may also be weather related. When it’s humid, pollen grains get sticky and don ’t transfer well from bee to stigma. Overly hot humid weather may also delay flowering. On the other hand, bees won ’t fly when its too cold or cloudy. For these kinds of reasons, some gardeners make sure of pollination by picking off the male flowers and dusting them onto the female flowers. We can also attract more bees to our garden by planting the flowers they love. 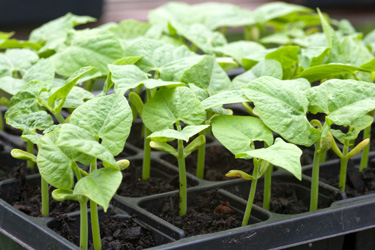 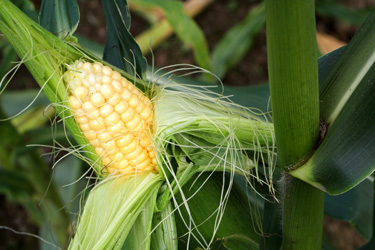 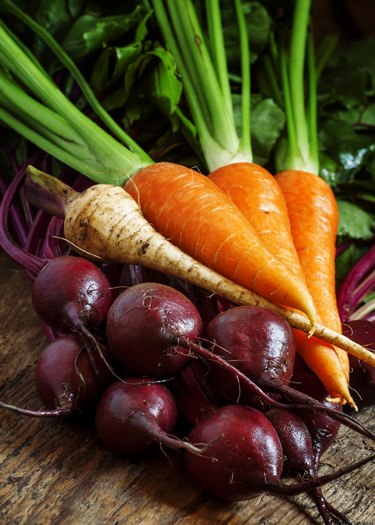 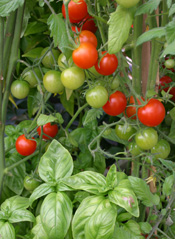 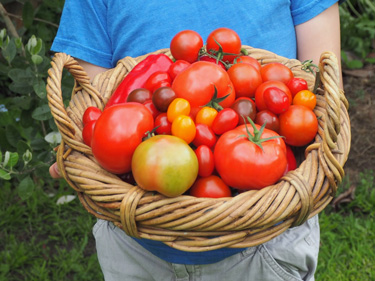 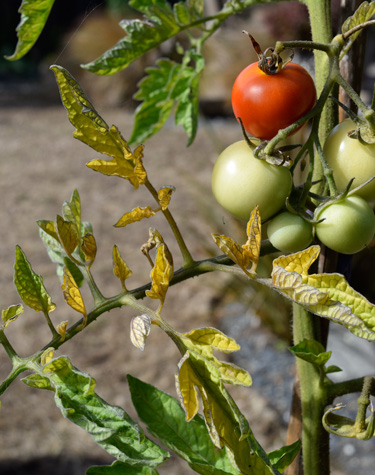 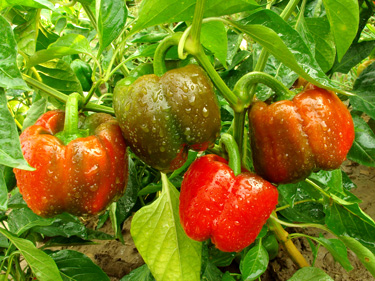 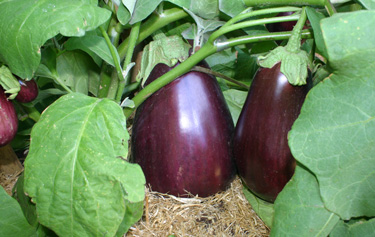 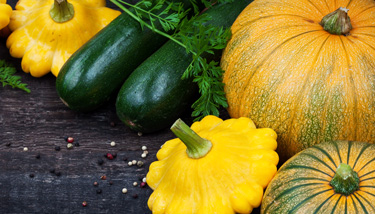